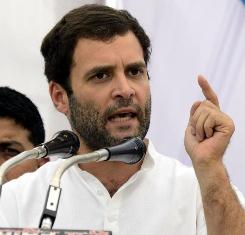 The Supreme Court on Wednesday faulted the magistrate for seeking a police report on a complaint of criminal defamation against Congress Vice President Rahul Gandhi, who had blamed the RSS for the assassination of Mahatma Gandhi.

At the outset of the hearing on the plea by Rahul Gandhi seeking quashing of the criminal defamation against him by RSS functionary Rajesh Madhav Kunte, the bench of Justice Dipak Misra and Justice Rohinton Fali Nariman, in a poser, asked if in a case of criminal defamation, can a magistrate take cognizance of a complaint after calling a report from the police.

Justice Misra referred to the judgment in Subramanian Swamy case rendered by him wherein the top court had held that in criminal defamation, police has no role and magistrate has to take the cognizance of the complaint based on his satisfaction.

The court said that it was incumbent on the complainant to prima facie satisfy the magistrate’s court on the veracity of the complaint.

Indicating that it would return the matter to the magistrate for fresh consideration, Justice Misra said: “Police has no role. No report can be called (from police). Under Section 199 of Cr.P.C. there is a different procedure. Magistrate can’t call for report from police. That is basic. Magistrate should make his own inquires.

“In the language employed under Section 499 and Section 500 of IPC, police has no role, it will be remanded (back to magistrate).”

Defending the magistrate calling for police report, Additional Solicitor General Tushar Mehta told the court that magistrate may by calling police report ascertain whether any such incident took place.

Taking exception to Mehta, a government counsel, addressing the court on the issue, senior counsel Kapil Sibal, appearing for Rahul Gandhi, wondered what was the role of the state in a matter of private complaint.

Mehta responded that he wanted to assist the court on the question of law and Rahul Gandhi had made the state a respondent in his petition.

As senior counsel U.R. Lalit, appearing for Kunte, said: “I only want the court to see what had happened in the present case before the court”, the bench asked him: “Can there be a law for X situation and a law for Y situation.”

Allowing time to Lalit, the court directed the listing of the matter on August 23.

But not only Lalit, even Sibal seemed oblivious of the apex court’s May 13 judgment saying that in criminal defamation cases, police had no role and magistrate had to apply his owns mind before issuing summons.

Upholding Sections 499 and 500 of the Indian Penal Code (IPC) and Sections 199 (1) to 199 (4) of the Code of Criminal Procedure (Cr.P.C), 1973, the top court had said that magistrate should be extremely careful in issuing summons on a plea for the initiation of any criminal defamation case.

Its verdict came while declining a batch of petitions including by Rahul Gandhi, Delhi Chief Minister Arvind Kejriwal and BJP leader Subramanian Swamy challenging the provisions of laws providing for criminal defamation. (IANS)

Tuition fee should always be affordable, education not a…