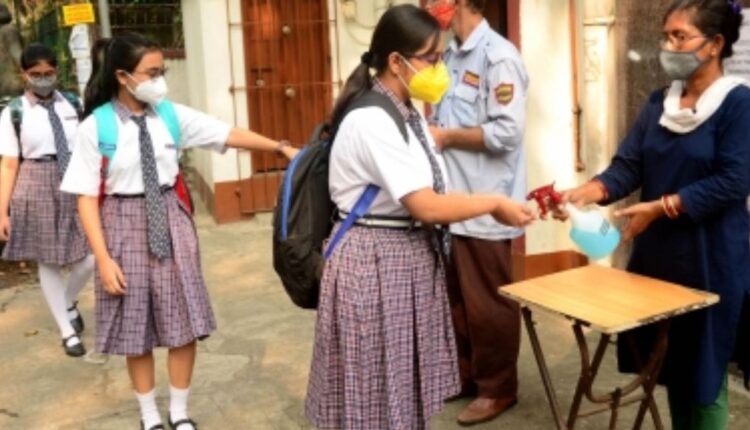 Kolkata: Considering the decreasing number of Covid cases in West Bengal, Chief Minister Mamata Banerjee said that schools will resume from February 3. She also announced that the state government has decided to lift some restrictions put in place to contain the spread of Covid-19.

The Parai School (neighbourhood schools) is a programme initiated by the Bengal education department to start classes on open areas in the neighbourhood with the help of local teachers.

Apart from this colleges and universities in West Bengal have also been given the go-ahead to conduct physical classes starting February 3.

The state government is mulling a scheme for the students who score more than 60 per cent marks in graduation and post-graduation to start six-months internship in different government institutions.

“The students can go through these internship programmes for six months where they will be given a stipend of Rs 5,000 per month. They will also get a certificate after successful completion of the internship,” the chief minister said.

The state government also said that the work force can be increased from 50 per cent to 75 per cent in private offices. The chief minister also announced that restaurants, bars and cinema halls can now operate at 75 per cent capacity compared to the earlier 50 per cent.

The same applies to sports arenas, which can now operate at 75 per cent seating capacity.

Flights from Bombay and Delhi will operate on a daily basis starting from Monday, the West Bengal Chief Minister said, adding that flights from Britain have also been allowed but the passengers will have to have their RT-PCR done.

As per the state health department’s most recent Covid-19 bulletin, West Bengal has 31,562 active cases of infection. The recovery rate for the novel coronavirus patients in the state stands at 97.38 per cent, while the fatality rate is 1.03 per cent.

At least 6.89 crore individuals in the state of West Bengal have received the first dose of a Covid-19 vaccine. This includes 5.02 crore beneficiaries who have been administered both doses.

Omicron can spread in several hours after infection, says expert