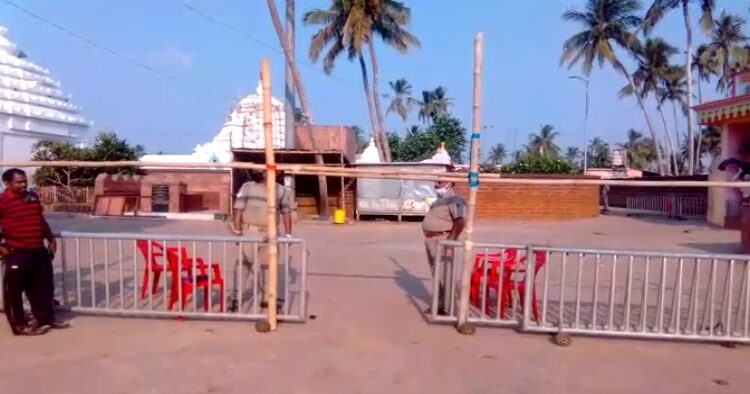 Brahmagiri: For the first time in history, the devotees were restricted from having holy darshan of Lord Alarnath during Anasara rituals of Lord Jagannath as the administration has enforced section 144 in and around the Alarnath Temple here in Odisha’s Puri district.

Due to rapid spread of COVID-19, section 144 has been clamped on premises of Shri Alarnath Temple and outside the shrine from yesterday night in view of influx of devotees to have Anasara darshan of deity. The restriction will remain in force till June 20, informed Brahmagiri Tehsildar Kishore Kumar Panda.

Section 144 imposed in all urban areas of this Odisha district

The district administration has sealed the Alarnath Temple as well as the roads prohibiting devotees from entering into the temple. The CCTV cameras have been installed at different places of the temple to keep vigil on activities of priests and other servitors.

Besides, two platoon of police forces and 10 officers have been deployed around the temple. Only the servitors with identity card can enter into the temple premises through north gate.

The move by administration has disappointed the devotees as they will be not allowed to have darshan of Lord Alarnath this year during Anansra rituals of Lord Jagannath.

There is a strong belief that the devotees get virtues on having darshan of Lord Alarnath when Lord Jagannath and His Divine siblings stay inside the Anansara House of Srimandir in Puri for 15 days after the deities fall sick following holy shower on Snana Jatra every year.

The Lord of Universe and His siblings go on a fortnight-long hibernation known as ‘Anasara’ after they fall sick following the bath with 108 pitchers of holy water. During this period, thousands of devotees used to throng the Alarnath Temple seeking blessings of Lord Vishnu.