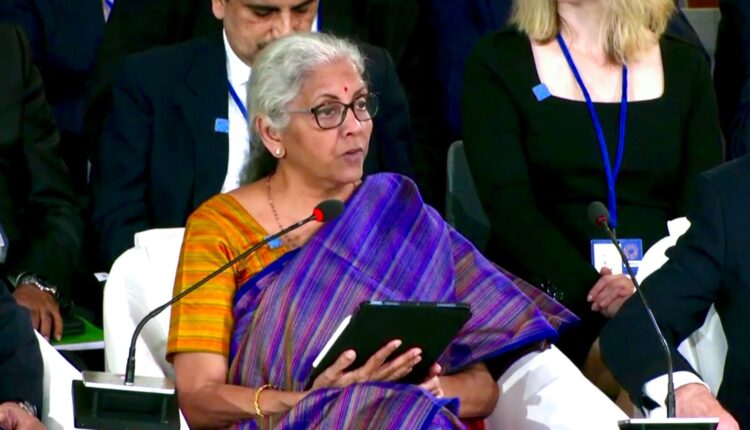 New Delhi:  As the rupee continues with its downward trend against the dollar, touching 82.32 on Friday, Finance Minister Nirmala Sitharaman has said that she sees the phenomenon as dollar strengthening and not the Indian currency sliding.

Addressing a press conference in Washington on Friday, Sitharaman said that rupee has withstood dollar’s rise and has performed better than those of many emerging market currencies.

“I won’t see this as rupee sliding but as dollar strengthening. It is a matter of fact that the rupee has withstood the rise of dollar. But it has performed better than many other emerging market currencies,” she said.

The Finance Minister added that RBI is working to prevent its slide and contain it’s volatility.

“I will just say that rupee will find its own level,” she said.

On rising inflation and soaring food prices, the Finance Minister said that the economic fundamentals “are good”.

Foreign exchange reserves are in a “comfortable position” and inflation is also “manageable” she said.

“Fundamentals are good. Foreign exchange is good though it has come down. It is in a comfortable position. Inflation too is manageable though we would love to bring it down… are making efforts to bring it down. However look at other nations’ inflation rates,” she said, but at the same time added that the Government is “conscious of fiscal deficit”.

The Finance Minister further said that on crypto currency G20 will collate data on it from global institutions and arrive at a framework which would look at platforms facilitating crypto trade.

India is due to take over G20 presidency next month.

“We will try and understand the money trail, detect money laundering and try and bring some kind of regulation on it. There is consensus among G20 members on it as many of them have raised concerns on this,” she said.

To a question on Income Tax department and Enforcement Directorate’s (ED) conviction rates, Sitharaman said: “ED is independent in what it does. It works on predicate offences and comes in the picture after other agencies pick up a case. There are instances which have stood out and if ED goes after them, it is with prima facie evidence.”