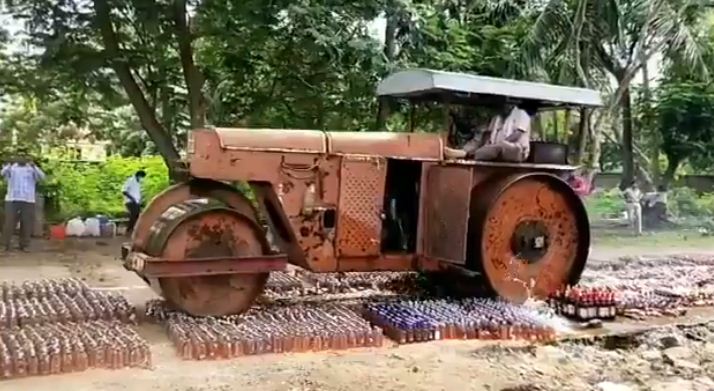 Vijayawada: Police in Andhra Pradesh’s Krishna district on Friday destroyed liquor worth Rs 72 lakh which was smuggled into the state from neighbouring Telangana.

More than 14,000 liquor bottles were crushed using a road roller in Machilipatnam town.

According to police, the bottles, containing 3,207 litres of liquor, were seized during the limits of 10 police stations in the district after relaxations in the lockdown.

Krishna district Superintendent of Police M. Ravindranath Babu told reporters that the liquor was seized during intensive checking conducted at the checkposts in Krishna and West Godavari district on the border with Telangana.

As many as 312 cases were filed in connection with the seizure of the liquor and after completing all legal formalities, the police and excise officials destroyed it.

Officials said since the Special Enforcement Bureau (Liquor and Sand) was formed by the government in May to curb their illegal transportation, the cases of liquor and sand seizure had gone up by 300 and 400 per cent respectively.

Andhra Pradesh formed the autonomous body to check illegal transportation of liquor from border states after the government introduced steps towards total prohibition.

The Y.S. Jagan Mohan Reddy-led government has reduced the number of wine shops by 20 per cent, besides removing 4,500 permit rooms and 43,000 belt shops.

After the liquor shops re-opened after a gap of nearly 45 days following the relaxation of lockdown, the government reduced their number further by 13 per cent and increased prices of alcohol by 75 per cent.