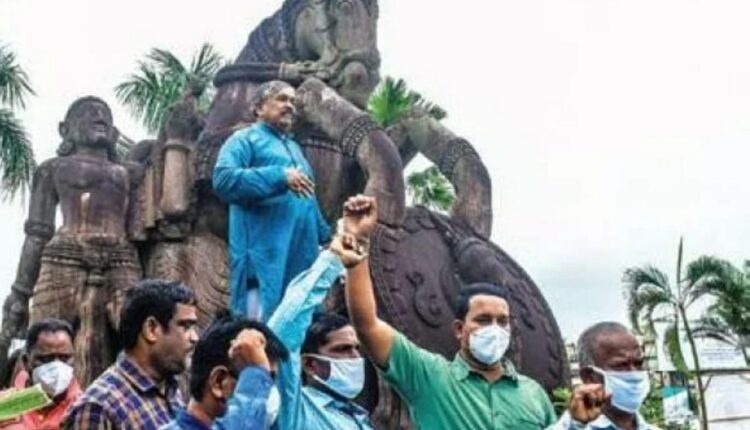 The decision of the Odisha Government to relocate the iconic warrior-horse statue from the Master Canteen square to the Raj Bhawan square in Bhubaneswar has sparked outrage. Unsurprisingly so. And although I might have my reasons to believe that the decision might actually be a judicious one, I will not deny that this relocation issue definitely deserves a debate.

The warrior-horse statue, which is a replica of the original stonework of the Sun Temple at Konark, was sculpted by late Padma Vibhushan Raghunath Mohapatra in 1988 and was subsequently installed at the Master Canteen square in the capital city. The sculpture was also adopted as the emblem of the Odisha government, adding additional significance to its existence. 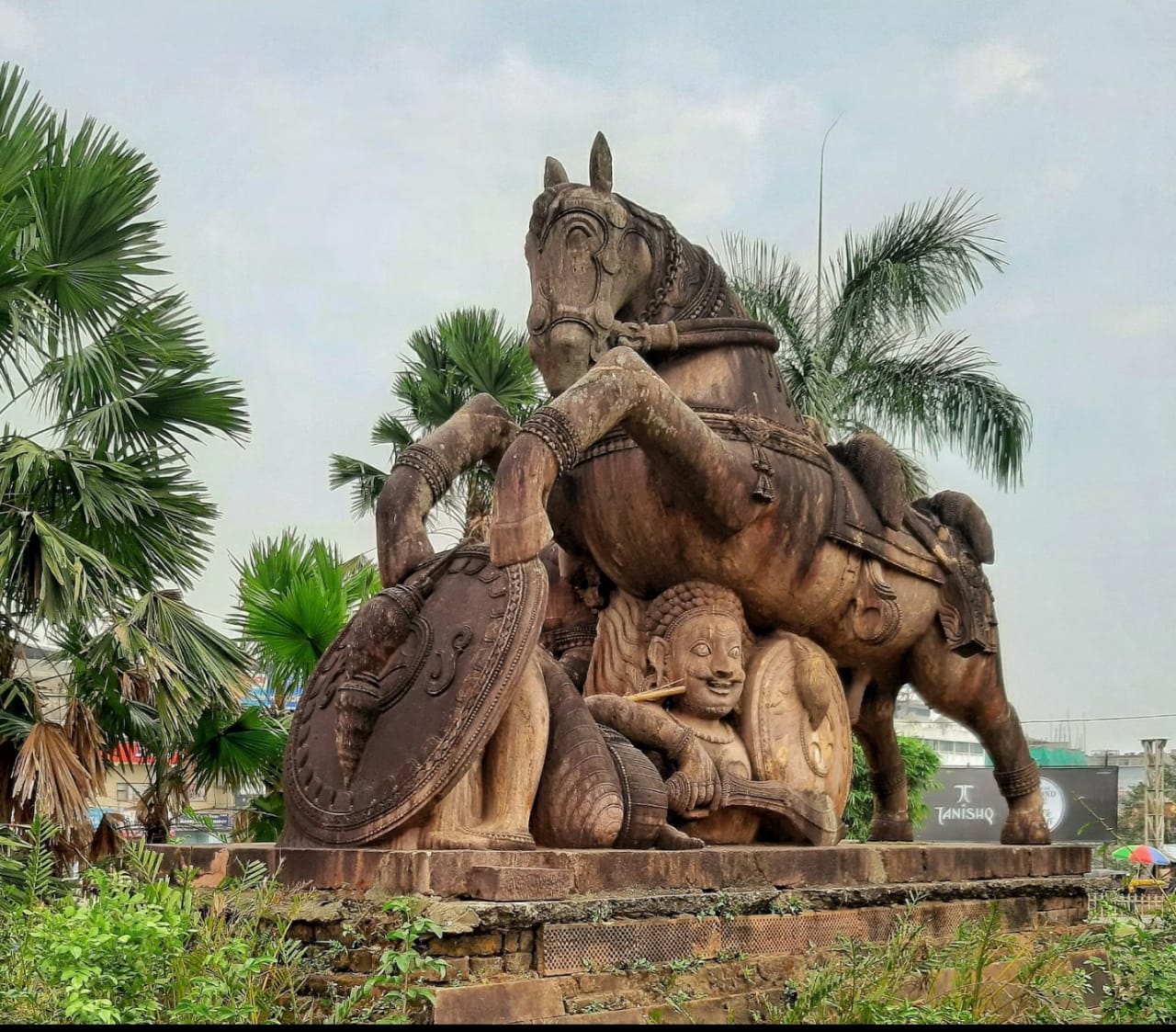 For thirty one years, the Warrior and Horse have stood steady at the Master Canteen square, one of the busiest junctions of the city, bearing silent witness to myriad protests and projects, demolition and development, fancy cafes and humble kiosks. The Square, named after a teacher (Master) who sold samosas in a small eatery (canteen), featured in various plans of the ambitious Smart City project. Redevelopment work has been initiated in various phases since 2015 in an effort to make the area a ‘Smart District’. Now, the thing with renovations and remodeling is that it’s always in ‘work in progress’ mode. Fresh challenges of an ever-expanding capital city, new innovations and learnings, and administrative policies keeping the future in mind always demand that we must be ready to change and accept change with time. The government has decided to relocate the statue to the Raj Bhawan square to make way for a multi-modal hub, construction of a flyover, beautification and all things ‘smart’. As it turns out, the Warrior and Horse statue do not fit into these grand plans and hence the decision to shift residence.

The way Bhubaneswar Municipal Corporation (BMC) has handled Covid-19 vaccination drive in the city is probably the smartest thing that has happened in a while. And I think it’s a great time to add more ‘smart’ things to that list. It would actually be great to metamorphose the smartness from paper to practice. So, I honestly don’t mind if the opportunity cost is the Warrior and Horse changing homes.

Of course there is nostalgia. There is a lot of history and sentiment. And where there is sentiment, there is outrage. Sorry, I take that back. There is outrage everywhere, irrespective of sentiment. I’ll correct that to ‘where there is free time, there is outrage’. Our Odisha Congress seems to have a lot of spare time and have taken it upon themselves to oppose this relocation business and is roaring to fight for the occupancy rights of the splendid but silent stone sculpture. The Odisha BJP too is voicing its dissent but I think it’s more of a squeak. Understandably so. I’m certain, like me, they too are not too convinced about building up this non-issue into an issue. After all, a dozen landmark but dilapidated buildings including the Parliament house will soon be demolished to make way for an avant garde Central Vista project. So, they probably understand the language of change. The Congress does not. Predictably so. 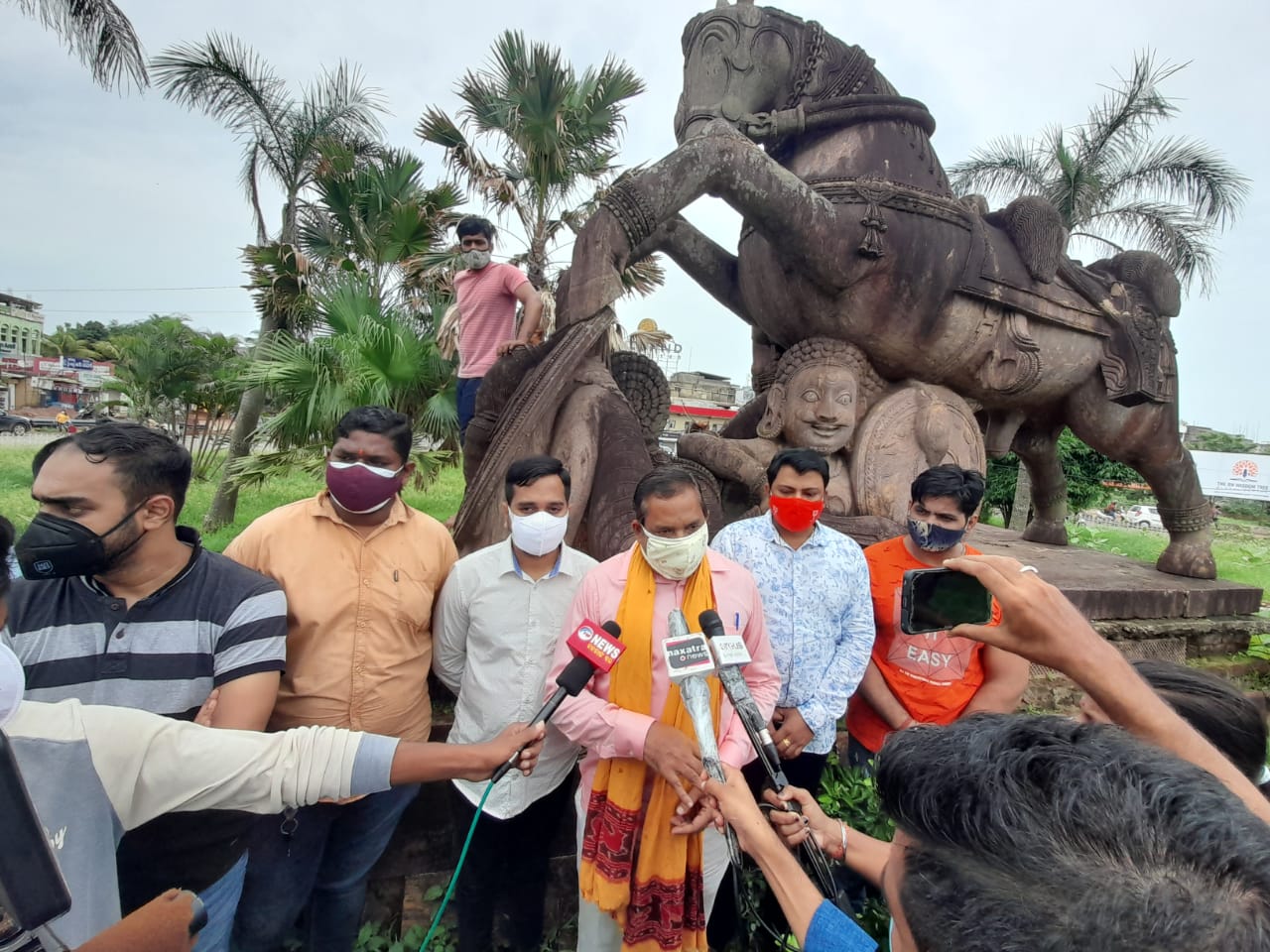 It’s completely acceptable to reminiscence old memories, dwell in the nostalgia and tweet conveying your sense of loss and disappointment. And then it’s advisable to move on.

Might seem like an atrocious analogy but this situation reminds me of a chain of events from 2006. The school I studied in, till my tenth grade, was making expansion plans to compete and stay relevant in the new age of ‘international schools’. An existing structure which housed a line of humble classrooms, where I spent a year of Prep when I was five years old, where we had our economics lessons in the ninth and tenth grade, was going to be razed to construct a new, tall building for 11th and 12th grades. I remember being so upset and thinking there was absolutely no need to add these extra classes and tamper with the routine. Bursts of nostalgia engulfed me and I remembered all the precious moments that had been spent in those classrooms. I felt anger towards the school management for demolishing my memories of the 12 magical years I spent there. The same year our school building was coated with a fresh coat of paint. The soothing, mild shade of sea green that I had seen and grown to love since childhood was sheathed in a bright, parrot green colour bordering on neon. It all felt grotesque to me.

The paint is still an eyesore but in hindsight I realised a few years later that if our school, which was quiet traditional in every sense, had not taken the bold decision of changing with time and adding 11th-12th grades in its course offerings, it would have been in ruins today.

In this case as well, I strongly feel sustainability trumps sentiment.

And honestly, we aren’t even talking about demolition here. We are talking about relocation. Relocation of the Warrior and Horse to one of the most well-maintained, aesthetically built, prime squares in the city – The Governor House square or the Raj Bhawan Square, not some insignificant, inconsequential location.

Let’s consider for a moment that the government agrees to the demand for the statue to stay put and the redevelopment plans to be modeled around it. In all probability, the masterpiece will lose its visibility and ultimately its significance over time. Only a few egos will win. Do we really want to see this sublime piece of stonework under a bustling flyover? And given the history of our under-construction flyovers collapsing at will, I honestly wouldn’t want this masterwork to be placed in that risky zone and I’m sure nor would the protesters if they give it a serious thought.

If we really have to outrage, I think outraging about the current condition of the Warrior and Horse would be great for starters. It’s no secret that the sculpture has been neglected, ill-maintained and showing signs of deterioration over these years. If we are so concerned about this statue, should we not be equally concerned about its upkeep? The visuals of Shri Sura Routray dotingly wiping the face of the horse with his gamuchha would have been cuter if he would have raised his voice against the neglect of the statue and other important statues stationed at various locations in the state. That certainly would have been more impactful considering TV news channels are ever-ready to showcase his shenanigans. I have to admit, they are quite entertaining.

Padmashree Sudarshan Sahoo had expressed a very valid concern questioning the safety of the statue during the shifting process as the probability of damage to the sandstone sculpture is very high. We must demonstrate our outrage by demanding accountability and pressurising the authorities to ensure that there is no damage to the statue during the shifting and reinstallation process. We must use our voice to pressurize the government to ensure the safety and appropriate maintenance of this iconic 31-year-old statue for the next 100 years.

The statue, a replica of the original at the Sun Temple at Konark, should also serve as a stark reminder about the inadequate conservation efforts of the ASI to safeguard the 13th century wonder which is almost synonymous with Odisha. If you care, then do read this important piece by Diana Sahu where she describes in detail the plight of this architectural paragon. Hundreds of fragments from the main temple, broken panels, even parts of Jagamohan and Natya Mandap have been abandoned in the open exposed to humidity, corrosion and eventual annihilation. This is something that should outrage every Odia.

There can be a long list of matters that we can and probably should outrage about. But not this. And as for the collective sentiment of the community is concerned, sadly we can only revel in old memories but it would not be wise to resist and rebel.

As far as I am concerned, I think it is an acceptable proposal to shift the Warrior and Horse to the Raj Bhawan square where it can be more prominently placed. It’s a beautiful, green and charming area, not cluttered with honking traffic and commercial buildings. The Warrior and Horse has been a mute spectator and in the middle of all the action, excitement and events at Master Canteen square for the last three decades. A Warrior never retires but now it is probably time for him and his horse to bask in the peace and tranquil of their new home.

The writer is the Executive Director of Sambad Group. She can be contacted at [email protected]