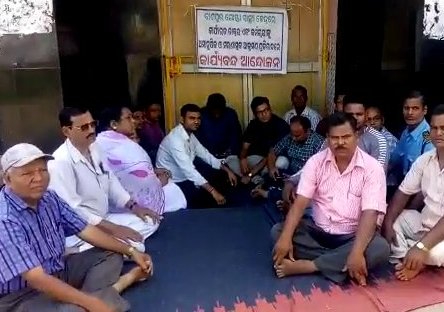 Khordha: Medical services at Banapur hospital in Odisha’s Khordha district got paralysed today as doctors resorted to a dharna demanding arrest of those who had allegedly thrashed a doctor yesterday after death of a patient.

ASHA workers and hospital staff also staged sit-in along with the doctors with a demand of protection for the doctors and arrest of all the culprits. Extending support to the agitating doctors, medicine shop owners in the area have kept their shops closed.

Police have so far arrested six persons in connection with the incident, reports said.

Notably, a doctor of the hospital was allegedly thrashed by kin of a deceased patient yesterday. One Prashant Sahu (22) of Khuntapalli village under Banapur police limits had received electric shock at his house. He was taken to Banapur hospital, where the concerned doctor declared him brought dead.

Tension gripped the hospital premises after the incident as the family members of the deceased allegedly beat the doctor claiming that the youth was still alive. A complaint in this regard was lodged by the doctor with police.