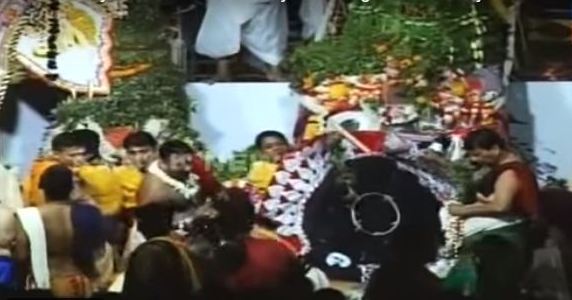 Puri: Controversy has become second nature to the servitors of Lord Jagannath temple in Odisha’s Holy town of Puri. The latest one pertains to plucking of decorative pieces adorned by Lord Jagannath and His siblings for the Gajanana Bhesa during Snana Yatra yesterday.

The unruly servitors have once again hurt the religious sentiments of scores of devotees as they were caught on camera pulling down the dazzling pieces.

The behaviour of the servitors has drawn sharp criticism from across all sections of the society prompting the temple authorities to assure action against them after scanning CCTV footage.

Worth mentioning, the servitors were seen taking off the elephant deck up late in the night at around 10.25 pm. The priests went berserk and dismantled the pieces as per their preferences.

“The way Lords’ sevaks snatched the pieces has pained us. If they would have restrained themselves for that moment, we would have felt that the Snana Yatra passed off without any disturbance,” a devotee expressed.

“The Sri Anga of the deities is considered sacred and one should be careful while dealing with the rituals. A slight deviation doesn’t make the Lords happy. It is a crime to tear the accessories of the deity,” a Jagannath cult researcher said.

On the other hand, the servitors’ body pooh-poohed the allegation.

“This is a normal thing. This happens every year where the servitors take out the Gaja Bhesa attire and distribute among themselves. They offer it before other deities,” said Binayak Dasmohapatra, vice president of Daitapati Nijog.

Notably, the Temple administration in association with the district administration had made elaborate arrangement to conduct the festival which marks the beginning of annual Rath yatra.

Touching the deities during the Snana Yatra was among the contentious issues for which surveillance cameras were installed to keep a vigil, but seems the exercise was in vain.

Hardly there would be any edition of the annual car festival where the almost three-week long festival passed off without much hullabaloo pitching the administration and the servitors against each other.