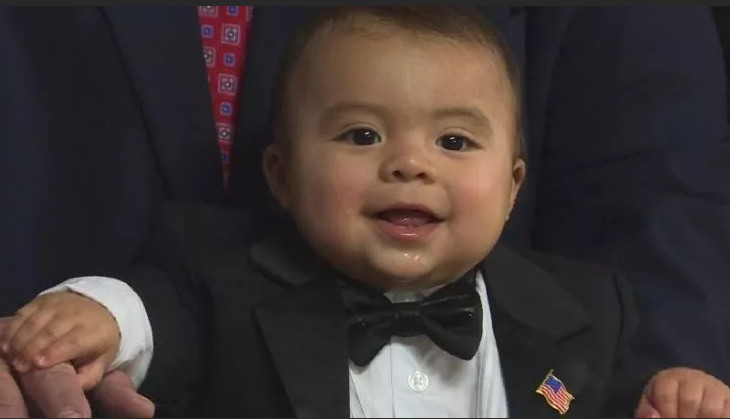 New Delhi: A seven-month-old baby became one of the youngest Mayor in America after he was chosen as the honorary Mayor of Whitehall in Texas.

William Charles McMillian known as Charlie, the newly elected Mayor, celebrated his appointment in front of hardly 150 guests at the Whitehall Community Center on Sunday afternoon. Charlie’s swearing-in comes after he was elected in October to serve the local communities in Grimes County.

Local community witnessed Charlie’s inauguration as  he stood on the podium with his adoptive parents Nancy and Chad Mcmillian around 4.30pm. He was kind of goo-goo-ga-ga over the people who had witnessed his inauguration like a happy kid. In the venet there was a band who played patriotic music, and local high school dance group performed and there was a mock secret service.

“The whole event was well-executed by his parents. Everybody wanted to hold him and walk around with him. The love for him was very strong. Our country is going through a difficult time and Mayor Charlie will bring peace and kindness back to the community.That’s the main purpose,” says one attendant.

Charlie even had a customized oath of office, which was administered by Frank Pokluda. “I, William Charles McMillan, do solemnly promise that I will faithfully execute the office of the Mayor of Whitehall and will do the best of my ability. Be kind to everyone on the playground, promote life, adoption and good, clean country living, pave all the gravel roads, take cookies to the Volunteer Fire Department, catch the biggest catfish, and preserve, protect and defend the community of Whitehall, so help me, Mom and Dad!”

“Whether you’re a Democrat, a Republican or an Independent, Charlie loves ya,” she said. “We’re promoting kindness and Making America America Kind Again. He is equal with any political leaning and a unifier.”

Next month, the Mcmillians will be heading to Washington D.C to meet the Texas Senator Ted Cruz.