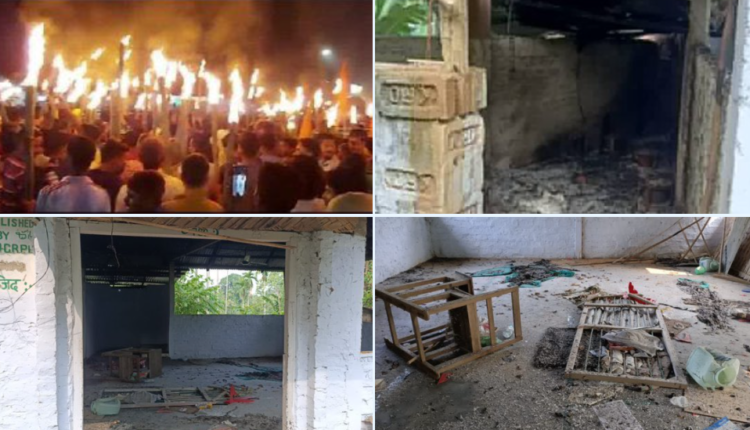 Agartala/Bhubaneswar: In a fresh wave of communal violence that began two days ago on October 20, several mosques and Muslims were allegedly attacked by right-wing Hindu groups across Tripura.

The religious hardliners reportedly attacked and vandalised at least six mosques and over a dozen of shops and houses belonging to the Muslim community.

As per reports, violent mobs clad in saffron clothing and carrying weapons were seen marching towards mosques. The mobs allegedly belong to various hard-line militant groups like the Rashtriya Swayamsevak Sangh (RSS), Bajrang Dal, Hindu Jagran Manch and the Vishwa Hindu Parishad (VHP). Local sources report that the violence was triggered by the communal attacks on Hindus in Bangladesh earlier this week.

Following the violence, several pictures and videos started circulating on social media with the hashtag ‘#StopAttackingTripuraMuslims’ climbing to the top of trends in India.

Students Islamic Organisation (SIO) activist Safiqur Rahman claimed that at least six mosques have been attacked since October 20. On Thursday, mosques in places like Krishnanagar, Dharmanagar, Panisagar and Chandrapur were vandalised on Thursday.

Salman Ahmed, national president of SIO took to social media to claim that Muslims in Tripura were attacked during Friday prayers.

The Tripura State Jamiat Ulama (Hind) on Friday urged the state government to take action against the miscreants.

“No person from the Hindu and Muslim communities in Tripura supports this kind of violence in Bangladesh. We have also protested against it,” TSJU(H) president Mufti Tayebur Rahman told reporters at Gedu Miah mosque in Agartala on Friday evening.

“Our party workers, mainly from minority cell, are keeping a close watch everywhere to ensure such undesirable activities do not happen,” BJP spokesperson Nabendu Bhattacharya said.