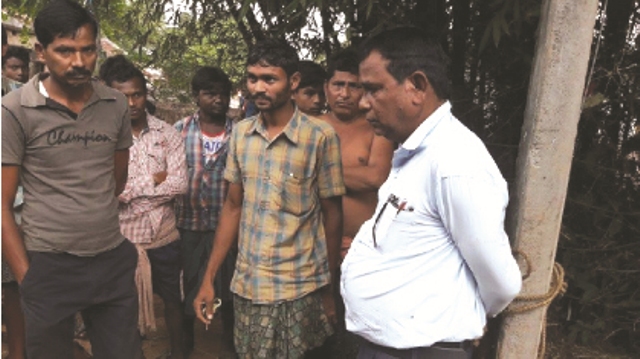 Kalabadia: Locals thrashed a headmaster of a government-run upper primary school black and blue by tying him to an electric pole for allegedly molesting a girl student of that school before he was rescued by the police in Odisha’s Mayurbhanj district today.

Police have arrested the accused headmaster identified as Tapas Kumar Giri and he will be forwarded to court tomorrow after medical examination, police said.

According to local sources, the victim who is a minor was residing with her grandparents and had stopped attending school for about a week.

On being questioned by her grandmother on the reason behind her unwillingness to attend school, the girl reportedly told her that she was molested by Giri and wasn’t interested to go to school, the sources added.

Tension prevailed in the village after the matter came to light. Villagers, who were waiting for the school to reopen today, pounced on the accused headmaster after he arrived at the school. Though he refuted the allegation made against him, irate villagers tied him to an electric pole and showered him with blows.

“Villagers had questioned the concerned headmaster over alleged molestation of a girl by him six days back. The father of the victim girl has lodged an FIR at Bangriposi police station in this connection. We have registered a case. An investigation is on and we have arrested the accused headmaster,” said Abhimanyu Nayak, SDPO, Baripada.