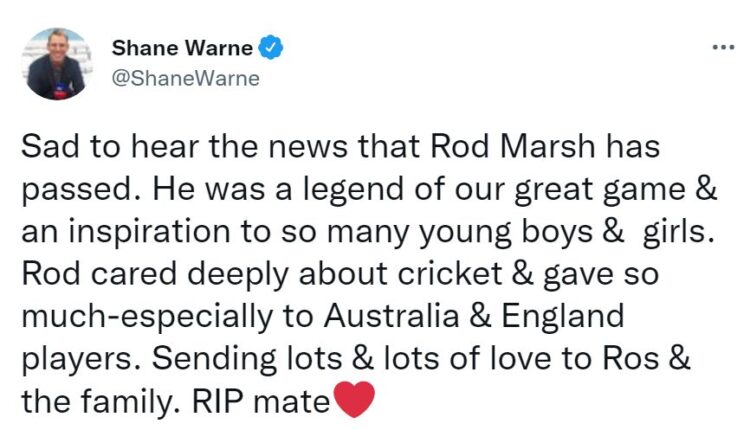 New Delhi: Legendary spinner Shane Warne’s last tweet in which he had condoled the death of former Australia wicket-keeper Rodney Marsh, who passed away on Friday in Adelaide at the age of 74, has gone viral after legendary leg-spinner’s death.

Warne had expressed his grief over the demise of Marsh in the tweet, which has now gone viral. In his last tweet, the legendary spinner paid rich tributes and condolences to Marsh’s family.

“Sad to hear the news that Rod Marsh has passed. He was a legend of our great game & an inspiration to so many young boys & girls. Rod cared deeply about cricket & gave so much-especially to Australia & England players. Sending lots & lots of love to Ros & the family. RIP mate,” Warne’s last tweet read.

Unarguably one of the greatest leg-spinners in cricket history, Warne played 145 Tests for Australia, scalping 708 wickets. He also bagged 293 wickets in ODIs and made more than 300 appearances for Australia across all formats.