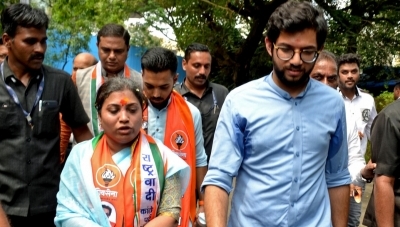 The conquest is the first notched by the party after it got a new name Shiv Sena- Uddhav Balasaheb Thackeray and a new symbol of ‘Flaming Torch’ a couple of months ago, giving a huge psychological boost to the party which suffered a devastating split in June.

In a stunner, some 12,806 voters – or 14.79 per cent – exercised the ‘None Of The Above’ (NOTA) option, nearly double the votes that all the candidates of two smaller parties and four independents secured.

The MVA has slammed the ruling Bharatiya Janata Party-Balasahebanchi Shiv Sena and its allies for blatantly propagating among the voters to exercise the NOTA option to stain the victory of Latke.

The winner Latke also took a potshot at ruling alliance, saying that “this is the exact number of votes the BJP would have got if it had contested the bypolls” and that’s why they withdrew their candidate, but the BJP dismissed her contentions.

The BSS, Aam Aadmi Party and Maharashtra Navnirman Sena did not put up any candidates, making it a virtual cakewalk for Latke in the elections.

Soon after her victory, Latke called on party President Uddhav Thackeray to seek his blessings, thanked all the leaders and workers of the MVA who helped in her win and also dedicated it to the ‘good work’ done by her late husband Ramesh Latke in the constituency.

Simultaneously, massive celebrations erupted with distribution of sweetmeats, music, jigs or ‘fugadee’ dancing, clapping and cheering among a large number of women, youngsters and even senior citizens in Andheri East, Bandra and Dadar near the Shiv Sena Bhavan.