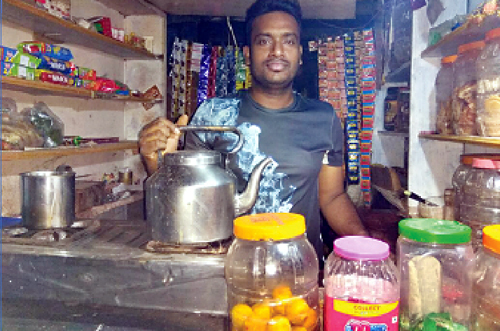 Bhubaneswar: In what could be termed as poor destiny for talented sportsperson, a national champion in wheelchair fencing was found selling tea here for livelihood and continue his practice for his passion ‘sports’.

Rakhal Kumar Sethy, a native of Tesinga village in Bhadrak district, who won the national championship for sixth time in expensive game like wheelchair fencing, is striving to purchase the sports equipment for the international level competition.

Despite being affected by polio, Rakhal has established himself in wheelchair fencing. Recently, he has made the state proud by bagging four medals including three golds in national wheelchair fencing held in Imphal. He has qualified for Asian Games scheduled to commence from October this year.

However, poverty poses a great challenge to him to continue practice for the competition.

It is difficult task for Rakhal, who is earning by selling tea at Lakhmisagar Square in Bhubaneswar, to purchase sports equipment required for international competition.

“Wife Sailabala helps me in managing the household by teaching music to children at home. But, it is not enough to maintain everything and continue practice with handful of amount. I can win more medals for the state and country if I get financial aid from government or private organizations,” Rakhal was quoted by ‘Sambad’ as saying.

Apart from sports, Rakhal is also associated in various social works. The secretary of an NGO ‘Parivartan’ has donated 20 times so far.

He is not confined to fencing sports. Rakhal, who started his sports career from volleyball, he is the skipper of Odisha Divyang Cricket team.

“I have been playing since childhood. But, I was not aware of opportunity for the divyang children in the sports. First, I got chance to play my international volley ball match against Sri Lanka. As the hope was less to get place in national volley ball team, I started wheelchair fencing in 2010. I won 29 medals including 15 golds and seven silvers so far in various national championships,” said Rakhal, who is placed at 34th in world ranking.

While Rs 50,000 is awarded by the government for playing in international competition, the expenditure costs around 2.50 lakh for taking part at the competition, he said.

Even, the participant is not provided any coach by the state government for the game for which he is bound to move outside the state for practice.