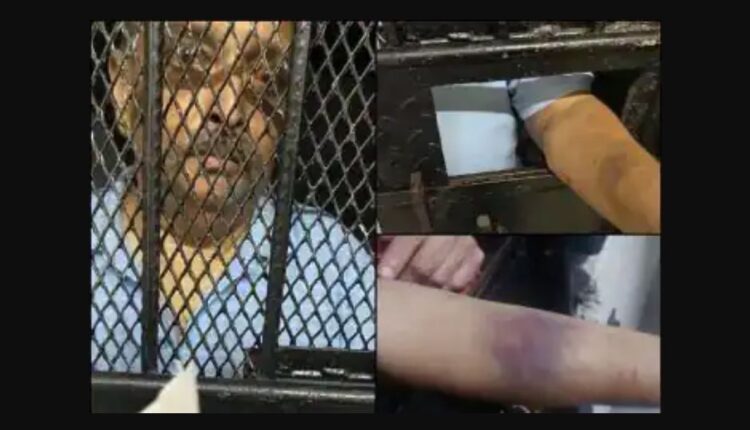 New Delhi: Pictures of fugitive businessman Mehul Choksi have surfaced on social media which showed several marks of bruises on his face and shoulders, even as a private jet landed in Dominica from Qatar.

Antigua News Room, a news outlet in Antigua and Barbuda, posted several pictures of Choksi with swollen eyes and several bruises on his arm.

In a tweet it said, “First pictures emerge of Mehul Choksi behind bars.”

On Thursday night, Choksi’s lawyer Vijay Agarwal had told IANS that Choksi was forced to get into a vessel from Antigua and was taken to Dominica. He also claimed that there were marks on Choksi’s body, implying the use of force.

“There is something fishy and I guess it was a strategy to take him to another place so that there are chances of sending him back to India. So I don’t know what forces are operating. The time will tell,” he had said.

However, Antigua Police Commissioner Atlee Rodney has rubbished the claims of Choksi’s counsel and said that they have no information on him being forcefully removed.

On Saturday, Antigua and Barbuda Prime Minister Gaston Browne also confirmed that a private jet has landed in Dominica with certain documents related to his case.

He was responding to a question during his radio programme on a question about a private jet arriving in Dominica from Qatar and said, “Yes I can confirm that a jet is there. My understanding is that Indian government has sent some documentation from the courts to confirm that Choksi is a fugitive. My understanding is that it is for the court hearing scheduled on Wednesday June 2 as the Dominica court has put a stay on his deportation. So the Indian government seems to be going all out to ensure that he is repatriated to India and face charges there.”

A Dominican court has restrained on Choksi’s deportation to India following a habeas corpus filed by his lawyers.

The High Court of Dominica on Friday once again “restrained” the extradition of fugitive businessman Mehul Choksi, who is wanted in India in Rs 13,500 crore Punjab National Bank (PNB) fraud case.

The Dominican court further stated that Choksi “must be transported to the Dominica China Friendship Hospital for medical attention and the administration of a Covid-19 test”.

Choksi, who is wanted in India by the CBI and the ED for the Rs 13,500 crore PNB loan fraud case, went missing from Antigua and Barbuda on Sunday, sparking a massive manhunt. He was captured in Dominica on Wednesday.

On Saturday, the United Progressive Party of Antigua noted the recent statements attributed to Prime Minister Gaston Browne in relation to Choksi, a citizen of Antigua and Barbuda.

“In a shocking statement on the matter, Prime Minister Browne indicated that the Government of Dominica should deport Choksi directly to India and not return him to Antigua and Barbuda because he would be protected by the Constitution here,” the UPP said.

“This statement is both irresponsible and frightening. It is not for the Prime Minister to decide who is entitled to the protection of the Constitution. We are a nation of laws: Every citizen of Antigua and Barbuda is entitled to due process and the rule of law must be respected by all,” it said.

“It was the Gaston Browne Administration that granted citizenship to Choksi. Under Section 9 of the India Citizenship Act, once a citizen of India accepts citizenship of another country, his Indian citizenship is automatically cancelled,” it said, adding that accordingly, as inconvenient and embarrassing as it may be for the Government, Choksi is a citizen of Antigua and Barbuda”, not India.

Following the statement of UPP, Agarwal said that my client (Choksi) is a human being, not some pawn that he can be just put in any square in the game of chess as per anybody’s desire or on anybody’s statement.

“My stand is vindicated and I am filled with gratitude and appreciation seeing the statement of United progressive Party Antigua, recognising that Antigua ought to protect the rights of every citizen.

On Wednesday, Browne had said that the fugitive diamantaire “needs to return to India” where he can face the criminal charges levelled against him.

Antigua News Room quoted Browne as telling journalists in Antigua and Barbuda: “We asked them not to repatriate him to Antigua. He needs to return to India where he can face the criminal charges levelled against him.”

Choksi has been residing in Antigua and Barbuda since January 4, 2018. The CBI and ED, which have filed separate charge sheets in the case, are trying for his extradition.

COVID vaccination: Around 12 cr doses to be available in June