Should Rohingyas get citizenship and not Hindu refugees, asks Union Minister 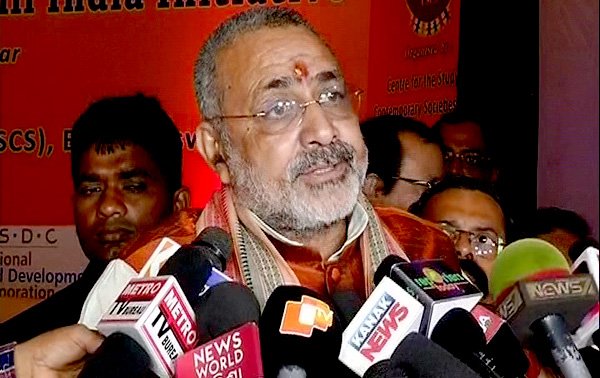 Sambalpur: Union minister Giriraj Singh on Saturday asked the Congress and those opposing the CAA whether Rohingyas and Pakistani infiltrators should get Indian citizenship and not the Hindu and Sikh refugees from the neighbouring country.

Anybody staying in India should chant “Vande Mataram” and “Bharat Mata Ki Jai”, the minister for animal husbandry, dairying and fisheries said here at a meeting to aware people about the Citizenship (Amendment) Act.

“I would like to ask the Congress and the tukde tukde gang whether Rohingyas, Pakistani infiltrators should be given citizenship? And should Hindu and Sikh refugees from Pakistan be denied citizenship? If they have courage, they should answer in yes or no,” Singh said.

Members of the minority community are being attacked in Pakistan and many temples there have been demolished, he said.

Singh said the ‘tukde tukde gang’ is active in the Jawaharlal Nehru University, which witnessed violence last week, and Congress leader Rahul Gandhi is trying to do politics there.

‘Tukde-Tukde gang’ is a term often used by right-wing parties to attack the opposition, particularly Left and Left-backed outfits as well as those who support them.

He said Muslims in India need not panic as the CAA will not snatch away anyone’s citizenship, but those infiltrating into the country would not get it.

“The new law simply aims at according citizenship to religious minorities from Pakistan, Bangladesh and Afghanistan. Some parties like the Congress are trying to spread false information about CAA and create disturbance in the country,” Singh said.

The minister asserted that anyone staying in India should chant “Vande Mataram” and “Bharat Mata Ki Jai”. Had all the Muslims shifted to Pakistan and Hindus
stayed in India during and after partition, there would not have been any necessity of the CAA, the BJP leader said.

The National Register of Citizens (NRC) is not being implemented in the country now and so, there is no need for discussion on the NRC at present, Singh said.

“The National Population Register (NPR) is linked to the Census process and needs to be updated. However, some people are trying to spread rumours about the NPR for no reason,” he said.