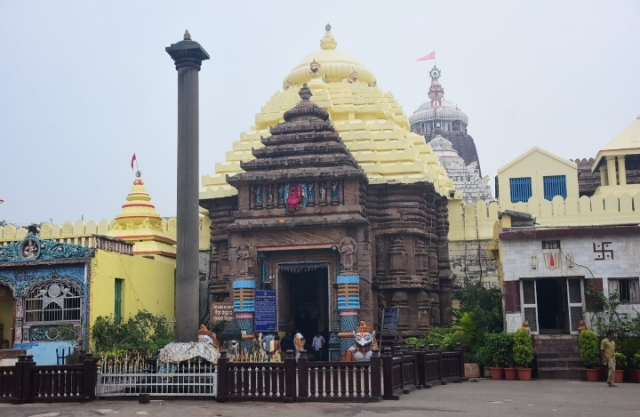 Puri: Shree Jagannath Temple Administration (SJTA) in Puri has plans to silver clad the sacred Garuda Stambha and primarily the cost has been estimated at Rs 1.3 crore. However, a devotee from West Bengal has shown interest to bear all expenses, a source said today.

According to the official source, Garuda Stambha at Natamandap in the 12th Century-old shrine has gradually run down and is now in a dilapidated condition as it is being touched by the devotees every day. It could collapse, if timely attention would not be given for its protection.

Garuda Stambha is associated with religious sentiments of the devotees. It is believed that a curse withers away and good fortune often comes to those who touch it. Most of the devotees cast a glance upon the sacred pillar before paying their obeisance to the Holy Trinity.

Giving his reaction over the sensitive issue, Archaeological Survey of India (ASI) former director SK Patel said, “The Stambha is made up of Chandan (sandal wood). It has been proposed to silver clad, in order to protect the sacred pillar.”

The Garuda Stambha will be surrounded by steel frames in a circular shape. A per the plans, the pillar will then be cladded with silver. The temple Administrator (Development) has written a letter to the managing committee in this regard on November 14. Opinions have been invited from people of different sections of the society including senior servitors, intelligentsia and technical experts.

Preliminary discussion over the proposal is underway and silver cladding work will be carried out if a consensus would be arrived at, the Administrator (Development) Ajay Kumar Jena said.