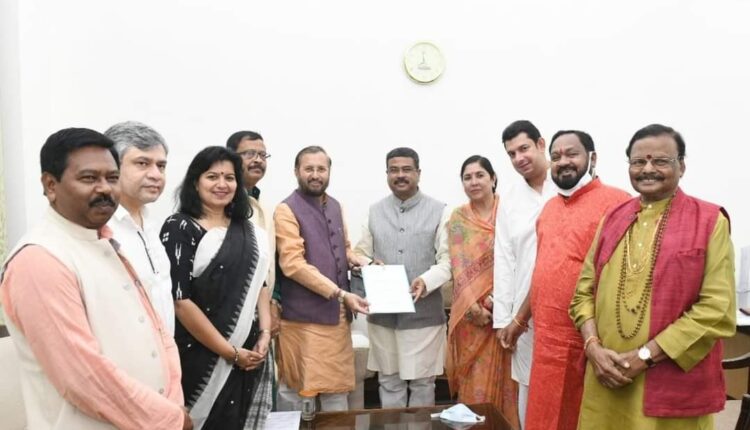 “We are distressed to inform you that the Forest Survey of India’s (FSI’s) fire alerts system and satellite pictures of NASA’s Fire Information for Resource Management System show thousands of fires engulfing huge tracts of green cover in Similipal, Karanjia forest division in Mayurbhanj district, Kuldiha Sanctuary in Nilgiri, Boudh Forest Division, Malayagiri in Angul district, Khandagiri hills in Bhubaneswar, Sunabeda and other adjoining areas. The blaze has also engulfed forests in Thakurmunda, Kendumundi, Naona, Gudagudia, Bareipani, Dudhiani, Satkosia as well as many other green tracts,” the MPs mentioned in the memorandum.

“It goes without saying that such forest fires not only cause irreparable damage to the land’s flora and fauna but also pose a threat to tribal and farming communities living on the periphery of forests, destroys their livelihoods earned from MFPs such as timber, mahua flowers, kendu leaves and medicinal plants, and also contributes to severe air pollution over urban dwellings and rising temperatures in the State,” the parliamentarians said.

“It is critical to address these ongoing forest fires immediately with swift and coordinated action between the Central and State forest departments while coming up with a long-term plan for prevention and mitigation of further forest fires in Odisha. We seek your personal intervention in convening a meeting with officials of your Ministry and the State Government for launching urgent measures to contain and subdue the forest fires in Odisha, assess the damage to forest land, flora & fauna as well as communities dependent on forests for their livelihood and take suitable remedial and reparative actions in this regard,” the MPs urged.

They also requested the Union Minister to set up an empowered committee with representatives from the Central and State forest department officials, environmentalists and forest conservationists for coming up with a detailed long-term action plan for preventing and mitigating future forest fires in Odisha.