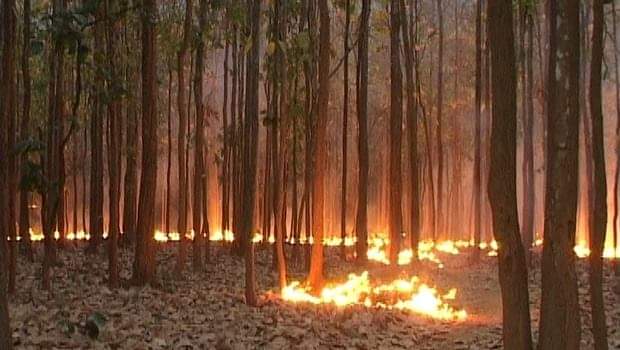 Baripada: A major wildfire has razed a part of Asia’s second-largest biosphere-Similipal Sanctuary- and there seems to be no end in sight. Efforts of forest officials and fire personnel have reportedly yielded no tangible results as the wildfire is yet to wane.

The devastating fire in the protected area has majorly affected the biodiversity with extinction of plants and wildlife,  also affecting the forest cover.

Seven out of the total 21 forest ranges- Chandanchaturi, Digdiga, Dukura, Podadiha, Thakurmunda, Barehipani and Astakuan are in the grip of fire for the last 10 days. Residents in the area allege that poachers are setting the forests on fire to trap endangered animals. Scare of the fire, wild animals are moving into human habitats and falling into poachers’ trap.

“There is a need to raise awareness among the people. We are not receiving proper cooperation from the locals. Some anti-social elements are involved in the forest fire for their personal benefits,” alleged Baripada Additional Conservator of Forest (ACF) Dilip Kumar Barik.

Mayurbhanj Princess Akshita M Bhanj Deo alleged that this a conspiracy to destroy the flora and fauna of Similipal sanctuary. She also requested the Centre and the state seeking their intervention into the matter.

Simlipal has been burning for 10 days today, #WorldWildlifeDay2021 . @CMO_Odisha Please help us sir🙏🏽 We need state and central help to put out massive fires which have engulfed India’s 6th largest elephant and tiger Reserve https://t.co/0Aoqv3PXtq

Reacting to the situation, Forest and Environment Minister Bikram Keshari Arukha said a team has been sent to take stock of the situation and submit a report tomorrow.

Why is the situation alarming?

Similipal  is Asia’s second largest biosphere covering a vast area of 2750 square kilometre, out of which 303 square kilometre from the core area and thick biosphere reserve is a sanctuary and one of the tiger projects and national parks of India.

The park is home to Bengal Tiger, Asian elephant, gaur, and Chausingha along with some of the beautiful waterfalls like Joranda and Barehipani Falls. This protected area is part of the UNESCO World Network of Biosphere Reserves since 2009.

The park is a treasure house of 1076 species of plants belonging to 102 families and 96 species of orchids . A total of 42 species of mammals, 242 species of birds and 30 species of reptiles have been recorded in Simlipal National Park.

If the wildfire is not controlled on time,  it can cause a major loss to the forest cover also endangering various species of flora and fauna.