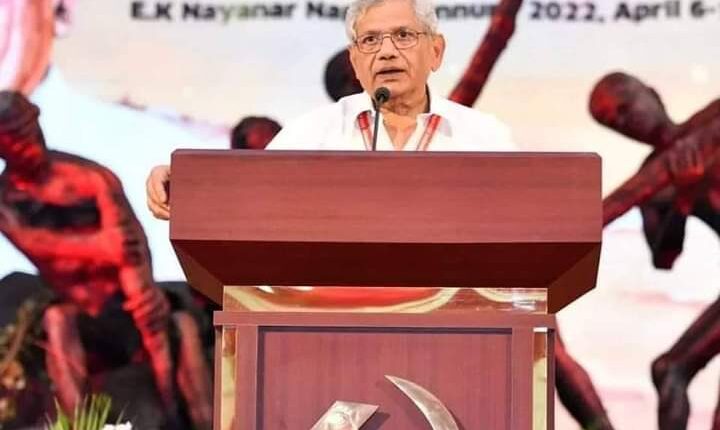 Thiruvananthapuram: CPI-M General Secretary Sitaram Yechury will continue in the post for a third term. This was announced at the party’s 23rd party Congress venue on Sunday.

Yechury was re-elected as the general secretary along with a 17-member politburo and an 85-member central committee during the 23rd party Congress.

Sitaram Yechury was first elected as the party general secretary during the 21st party Congress at Visakhapatnam in April 2015. He was re-elected to the post at the 22nd party Congress at Hyderabad on April 18, 2018.

He succeeded Prakash Karat as the general secretary of the party who held the post from 2005 to 2015.

Kerala ministers K.N. Balagopal and P. Rajeev,Awoman leaders, C.S. Sujatha and P. Sathidevi are the new entrants to the party central committee from Kerala after senior leaders Vaikom Viswan, P. Karunakaran, and M.C. Josephine were dropped from the committee.

Ram Chandra Dome from West Bengal has become the first Dalit leader to be in the Politburo, the highest decision-making body of the CPI-M. The party way also criticiused for not including a Dalit in its Politburo since its inception in 1964.

The dropped Politburo members, S.Ramachandra Pillai, Hannan Mollah, and Biman Bose have been retained as the special invitees to the party Central Committee.