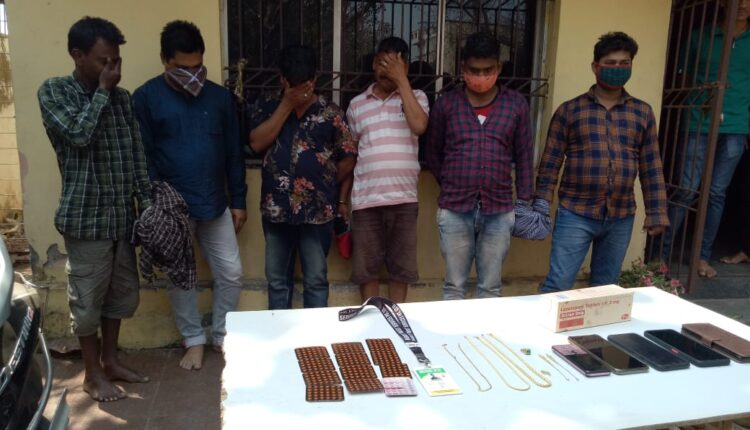 Bhubaneswar: In a major success, the Commissionerate police cracked three loot cases lodged in police stations under the Bhubaneswar Urban Police District (UPD) and arrested six persons including a medicine shop owner for their alleged involvement.

The Special Squad was directed to assist the two police stations to investigate the three loot cases keeping the gravity and fatal modus operandi, said a senior police official.

Narrating the modus operandi of the accused, the police official further said they used to travel to different destinations by train or bus from Bhubaneswar. During their return journey, the accused would befriend with commuters, who were mostly new to the Capital city, with a promise to help them get their work done or on pretext of providing lifts.

Once the accused were sure they have won the confidence of the targeted person, they would offer tea, coffee, cold drinks or snacks laced with ATRIVAN 2 MG, a strong sedative.

The police official added after the targeted person fell unconscious, they would steal the victim’s belonging and leave the concerned person unattended in public places.

The accused were staying at a rented place in Bhubaneswar. Three notorious criminals, two receivers of the stolen gold jewellery were among the accused. Also, a medicine shop owner was arrested for selling ATIVAN drug without prescriptions.

The police official stated the medicine shop owner was aware that the looters would use the sedative for committing the crime.

The police seized three gold chains weighing 40 grams, 18 stripes of ATIVAN 2 MG, one Hero motorcycle and six mobile phones from the possession of the accused.

Investigation is on to find out complicity of more persons in the cases, the police official added.

Odisha to extend all cooperation in India’s fight…