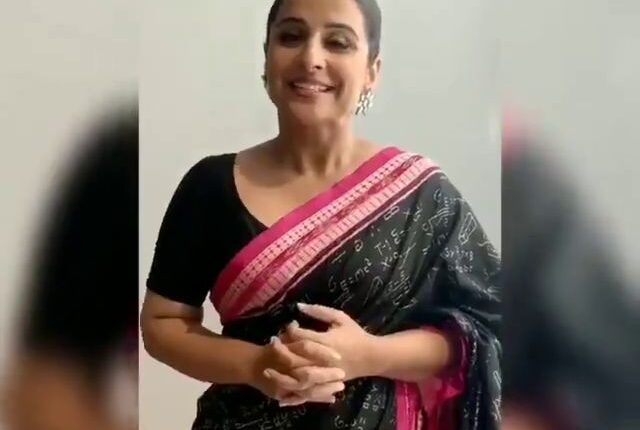 Bhubaneswar: Weavers of Odisha have won many hearts with their weaving skills creating impressive and comfortable sarees and handloom products. Especially weavers of Sambalpur in Odisha have left the world awestruck by their work. Starting from common man to celebrities and socialites have been all praise for the skills of the Sambalpuri weavers for decades.

Recently Bollywood Actress Vidya Balan was also bowled over by the weaving skills of the Sambalpuri weavers.

Wearing a Sambalpuri saree, Vidya in a video message heaped praises on the Sambalpuri weavers for creating beautiful handloom products.

A visibly elated Vidya also informed during the release of her upcoming film ‘Shakuntala Devi’ she will be wearing the Sambalpuri saree.

“Thanks to the Sambalpuri weavers for this wonderful Sambalpuri saree. During the release of ‘Shakuntala Devi’ I will wear it,” she said.

“It is a difficult time for everyone. But there will be an end to these difficult times. Have faith in yourself and take care. You are precious to us,” Vidya further said in the video message,

Vidya’s ‘Shakuntala Devi’ is scheduled to release on Amazon Prime on July 31.