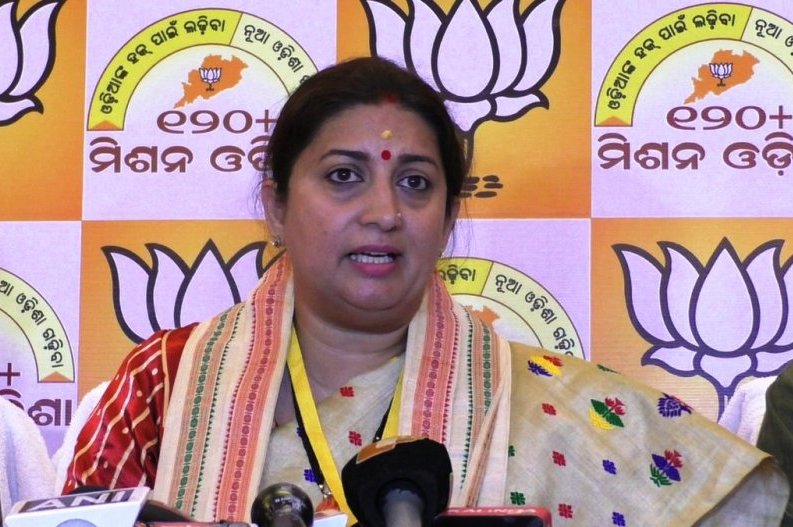 Bhubaneswar: Union Textiles Minister Smriti Irani today launched a scathing attack on Chief Minister Naveen Patnaik for rejecting Ayushman Bharat saying the State government does not want to give benefits to its people under the Central scheme.

“Even as Naveen Babu and his minister in the House have admitted that over 60% women and children are suffering from anaemia and malnutrition in the State, he declined to implement Ayushman Bharat for political reason,” she said.

Odisha is on the top of the list of child stunting in the country. We come across several reports from Odisha that patients are carried on cot to the hospital for treatment. Amidst such situation, Naveen Babu did not want the central scheme in the State, she said.

“When I reached here, got news about sexual abuse against a woman. This clearly proves the deteriorating situation of law and order in the State. Since Law and Order is a State matter, Naveen Babu has failed in development and failed in ensuring safety to women,” Irani said.

She also attacked Odisha CM on OTM, no price cut in petrol and employment.

“Naveen Babu has been incapable of reviving OTM firm. However, I have assured my party workers that if the State government attempts for revival of OTM, the Centre in association with the State will help in developing the textile sector in Odisha,” she said.

“The State government had been targeting the BJP over fuel price hike. When Centre slashed the petrol prices by Rs 2.50 and BJP-rules States also followed the same to bring relief for the consumers, Naveen Babu refused to cut State tax in petrol. Neither he wants to benefit the State people under Ayushman Bharat scheme, nor is he reducing petrol prices here,” Irani said.

However, she is confident that the saffron party will achieve the target of 120+ seats in Odisha Assembly.

“The party vows to meet the target in the State. Even in the 2019 Lok Sabha polls, the party in the State will have significant contribution in Indian politics with having maximum number from Odisha,” the union minister said.