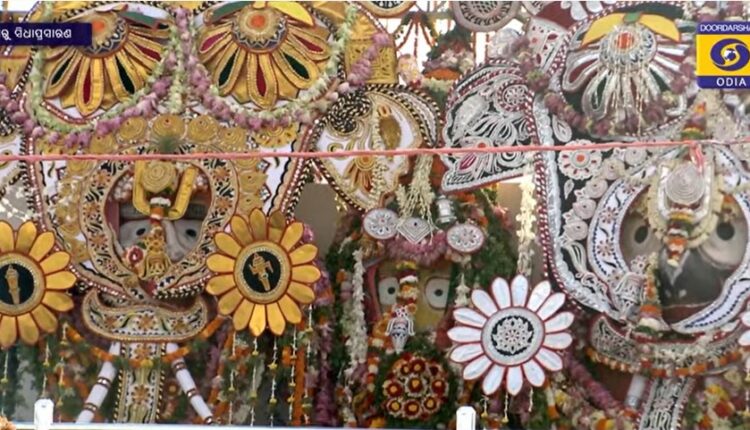 The deities were adorned with Hati Besha or Gajanan Besha after their Holy bath on the Snana Mandap, located near Ananda Bazaar on the premises of the Jagannath Temple earlier in the day.

While Lord Jagannath and Lord Balabhadra donned the Gajanan Besha (white and golden in colour), Their Sister Devi Subhadra appeared in Padma Besha (lotus flower attire) after having Holy bath with 108 pitchers of sacred water on the Sanan Mandap.

The costumes of deities for the Hati Besha are prepared by the artisans at Raghaba Das mutt and Gopal Tirtha mutt.

Snana Jatra is one of 12 most significant festivals of Lord Jagannath held every year. This year, devotees were allowed to have darshan of deties at Snana Mandap for a period of three hours.

The deities were taken to the Snana Mandap in the morning for the rituals. They were decorated with fragrant flowers and Tulasi (holy basil). The three key priests of Lord Jagannath, Lord Balabhadra and Goddess Subhadra worshipped the holy water brought by servitors belonging to Garabadu community from a well located inside the centuries old temple and poured the 108 pitchers of the water on the deities. While Lord Jagannath took holy bath with 35 pots of water, the Jalabhisek of Lord Balabhadra, Goddess Subhadra and Sudarshan were conducted with 33, 22 and 18 pitchers of water respectively on the auspicious occasion of Snana Purnima, also known as Jyestha Purnima.

Later, the servitors altered the wet clothes of deities and decorated with flowers and Tulasi again. Puri King Gajapati Dibyasingha Deb, who is the first servitor of Lord Jagannath, visited the Snana Mandap from his palace in Tanzan to pay obeisance to deities. He performed chhera pahanra (sweeping of the floor) at the Snana Mandap, one of the major rituals ahead of Hati Besha, with the priests chanting hymns.

There is a story behind Gaja or Hati Besha of Lord Jagannath. According to researchers, the Lord of Universe had given darshan to Ganapati Bhatt, a staunch devotee of lord Ganesha, on the Snana Mandap on the auspicious occasion of Snana Purnima.

In 15th century, Pandit Ganapati Bhatt of Mahaganapatya community had visited the centuries old shrine in Puri to have darshan of Lord Jagannath. He witnessed Chaturdha Murti on Snana Mandap on Snana Purnima. However, he could not get satisfaction as he wanted to see Lord Ganesha within Lord Jagannath. While he was on his way back with disappointment, Lord Jagannath disguised as a priest insisted him to return the temple where he can see his Lord Ganesha. When he went back, was overwhelmed to have darshan of his Lord Ganesha within Chaturdha Murti on Snana Mandap. Since that period, the deities are being dressed in Gajanan Besha every year after ceremonial bathing on Jyestha Purnima, which is said to be the birthday of Lord Jagannath.