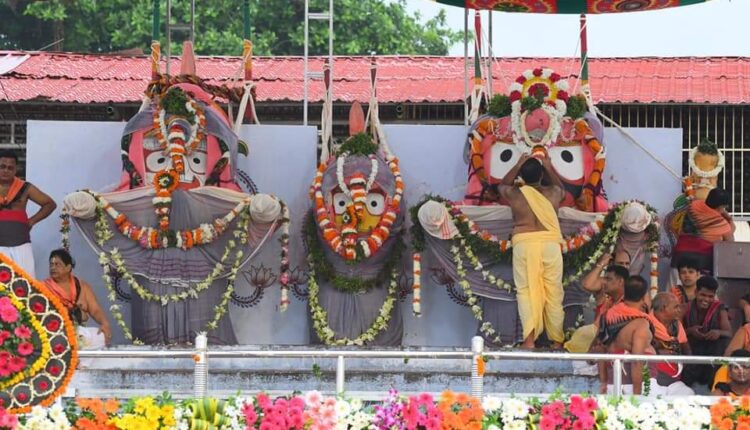 Puri: The Snana Jatra or Deba Snana Purnima, a ceremonial public bath ceremony of the three deities of Lord Jagannath, Lord Balabhadra and Devi Subhadra is an important event in the run-up to the Rath Yatra or the Car Festival. But is it just a ceremonial bath for the ‘humanised gods’ or does it go beyond its ritualistic and puranic features ?

The day, the full-moon day of the month of Jyestha, is considered to be the birth-day of Lord Jagannath.

According to the Skanda Purana Raja Indradyumna, who installed the wooden Deities, introduced the idea of giving Them a bath.

‘Niladri Mohadaya’, a religious text in Odia records the rituals of the Snan Jatra festival in soem detail. Sriharsa in his ‘Naisadhiya Charita’ also refers to this ritual bath of the Puri trinity.

The deities are bathed by 108 pitchers of water drawn from  a well situated near the Sitala temple in the confines of the Jagannatha temple.

There is a view that like all other major festivals in Odisha, Snan Jatra has direct links with agrarian calendar of the state and that the ritual bath signifies the onset of monsoon.

Seetal Sasthi, the popular festival in western Odisha, is also believed to have been a monsoon-related celebration, held to invoke the Rain God to soak the parched fields and ready them for ploughing for the next sowing season.

A day before the Snana Jatra the three deities of Jagannath, Balabhadra and Subhadra along with the image of Sudarshana are taken out from the sanctum sanctorum  in a procession to the Snana-Bedi or the Snana Mandap within the temple precinct. The bathing platform is at such a height that visitors standing outside the temple can easily get a good view of the deities and the ritual bath.

After the bath, the deities are dressed up in the Gajanana (elephant) or Ganesha Besha and their daily food offering or Bhogalagi is made on the Snana Mandap, in full public view.

After the Snana Jatra , the three deities keep away from public view for 15 days and this temporary disappearance is called the ‘Anasara’ period. The popular belief is that after the ritualistic bath the deities develop fever and therefore do not return to the sanctum sanctorum.

However, it is during this period that the ‘washed’ wooden deities get a fresh coat of colour before they appear in public in their new-look ‘Naba Joubana Besha’, a day before they set out on their chariots to the Gundicha temple. The Anabasara, therefore, appears to have been a ritual that allows the re-painting of the wooden idols before they move out of the sanctum for their public ‘darshan’ on the day of the Rath Yatra.

A special bath of Jagannath takes place on the Purnima of Jyestha month (Devasnan Purnima), to commemorate the appearance day of Lord Jagannath.

On the fourteenth day (Chaturdashi – the day before the bathing – Purnima) when the Deities are taken out in procession, the whole process is called Pahandi or Pahandi vijay. Scholars have given different interpretations of the term (‘Pahandi’). Some opine that it has been derived from the term ‘Praspanda’ meaning movement. Some others are inclined to interpret it as derivation from Pandya vijaya.

Puri Ratha Jatra to be held like last year amid COVID…

For the festival the Snana Vedi (bathing platform) is well decorated with traditional paintings of trees and gardens. Flags and toranas (arches strung with mango leaves) are also put up. The Deities are profusely decorated with flowers. All kinds of perfumes such as Dhupa (incense), Aguru (oils) etc. are then offered. As the ‘Pahandi’ of the Deities takes place to the accompaniment of music and beating of various indigenous drums, thousands of devotees jostle and crave for a look at the Deities in procession.

In Puri the bathing procedure is as follows: After Mangala Arati, the Suaras and Mahasuaras go in a ceremonial procession to fetch water from Suna Kua (Golden well) in vessels of copper and gold. All of them cover their mouths with a piece of cloth so as not to contaminate it even with their breath. Then all the vessels filled with water are preserved in the Bhoga Mandap. The Palla pandas (a class of Brahmin priests) then purify the water with Haridra (turmeric), Java (whole rice), Benachera, Chandan, Aguru, flowers, perfumes and medicinal herbs. The bathing festival takes place during the morning hours of the purnima tithi. The filled vessels are carried from Bhoga Mandap to the Snana Vedi by the Suaras in a long single-line procession. This ritual is called ‘Jaladhibasa’ (Jala – water, abhishek – bath).

Prior to the bathing ceremony Jagannath, Baladeva and Subhadra, covered in silken cloth and then smeared with red powder, are taken in procession to a platform which is specially decorated and purified with water and incense.  One hundred and eight gold vessels are filled with water. Abhiseka is performed with this water, accompanied by the chanting of vedic (Pavamana Sukta) mantras, kirtana and blowing of conch shells.

Due to the amount of bathing liquids that are offered to cool the Lord’s transcendental body His painted form takes a bit of a wash-out. The coloration of the Deity’s faces are painted on with natural earthly mineral paints not modern oil based paints, so when water is applied to cool Their forms it also has the effect of washing away the features of the former painting. As usual the Lord has a plan to make everything go smoothly. To bridge the episode of His bathing and the period that He comes out to bless everyone for Ratha yatra He organized some special pastimes by which his devotees can serve Him and remember His wonderful forms.

So as to keep a wonderful mood of seeing the Lord in an uplifting manner the Lord arranged for the Hati Vesha festival where Lord Jagannatha and Lord Balaram then puts on the elephant dress, Hati Vesha, and Lady Subhadra wears a lotus flower vesha.  The original story is told in several different ways, some call Hati snan (elephant bath) some call Ganesh abhishek as they identify the following story as being the original cause of the Lord to wear this elephant vesh for His devotee.

It is said that a staunch devotee of Lord Ganesh who was a profound scholar visited Puri during Snana Jatra. He was amply rewarded by the king of Odisha for his scholarship. The king asked the scholar to accompany him to see Lord Jagannath which he refused under the pretext that he wouldn’t worship any “God” other than his Ishthadevata Ganesh. Somehow he was persuaded and brought before the Snana vedi.

To the utter surprise of all, Lord Jagannath appeared with an elephantine form that resembled as Ganesh. Since then during Snana Yatra when the sacred bath is performed, the Deities are dressed like elephants – resembling Ganesh. Various other legends are also told and reasons assigned explaining the Ganesh Besha (vesha).

During the sacred bath the colours painted on the images generally fade.  Seeing the wooden deities in discolour devotees may not have the appropriate devotional attitude and in fact may feel sinful repugnance. For this reason, the images are immediately dressed in the Hati vesha (besa) in which they remain mostly covered.

After the Snana Jatra, the Deities are kept away from public view for fifteen days and during all these days the daily rites of the temple remain suspended. As Jagannath himself instructed, after this ceremony, he is not seen for a fortnight. The Deities are kept on a special “sick room” called the Ratan vedi inside the temple. This period is called ‘Anabasara kala’ meaning improper time for worship. It has been said earlier that the Deities are discoloured as a result of the sacred bath.

During these fifteen days the Daitas (descendants of Viswavasu, the Sabara) repaint and restore the Deities and Jagannath’s fine decorations. The period of colouring and decorating the Deities is divided into seven short periods, each of two days duration, and a short period of one day set apart to give finishing touches. Thus the period covers the whole fortnight. On the 16th day the Deities in their new forms after renovation become ready for the public view – darshan.

The festival of the first appearance of the Lord Jagannath to his devotees is called Netrotsav (festival for the eyes) or Naba Yauvanotsava (festival of the ever new youth). According to priests of the Jagannath temple the devotee washes away all his sins if he gets a vision of the Lord on this day. On this occasion, therefore, great rush of people occurs in the temple. The Shilpa Shastras and Agamas testify that the Deities become suitable for worship only after the performance of the rite of ‘Chakshyu Unmilana’ (Opening of the eyes).

During ‘Anabasara’, the Daitas offer to the Deities only fruits and water mixed with cheese, and Dasa mula medicines to cure his fever.. In a devotional mood the devotees accept that due to all the bathing the Lord becomes transcendentally poorly, and therefore needs to take rest. Like human beings they are considered to have fallen ill and are treated by the Raj Vaidya or the King’s physician with specific medicines (Dasamulas).

The temple-festivals which are held in a bigger and elaborate scale in the important shrines of Puri and Bhubaneswar are also held simultaneously in all other small shrines of the respective Deities, though in modest scales. Likewise the Snana Jatra is held in many other temples of Odisha, and now all over the world.