Snana Purnima 2022 in Puri: Ritual Timings, Traffic Restriction and all you need to know 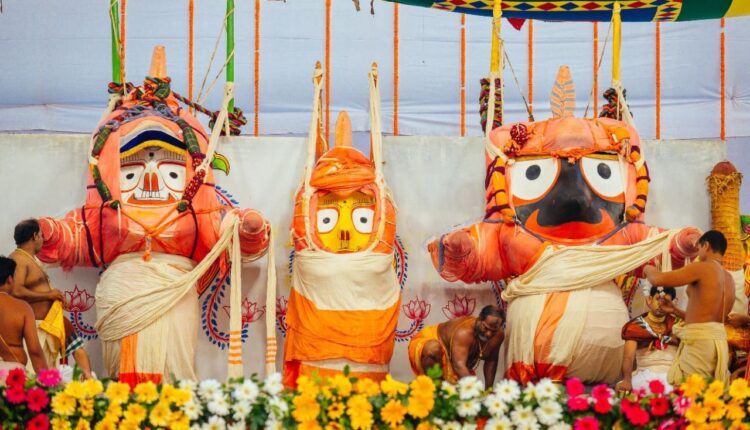 The Snana Jatra or Deba Snana Purnima, a ceremonial bath of Lord Jagannath, Lord Balabhadra and Devi Subhadra, is an important event in the run-up to the Ratha Jatra or the Car Festival in Odisha’s Puri, which is being held today.

The day, the full-moon day of the month of Jyestha, is considered to be the birthday of Lord Jagannath.

For the very first time, devotees will be allowed to have darshan of Lord Jagannath and His siblings for three hours at the Snana Mandap of the Shree Jagannath Temple here.

In view of the festival, the following traffic restrictions will be imposed from midnight till the end of the festival as per the traffic mobility plan.

* There will be no restriction on regular passenger buses from Bhubaneswar/ Konark side to enter Municipality Bus Stand. Buses coming from Bhubaneswar and other areas will be diverted accordingly.

* Puri Town Shuttle Buses will be allowed up to Medical Chhaka on Badadanda.

* Two wheelers will avail parking on Badadanda from Grand Centre up to Market Chhaka on first come first avail basis and will be diverted accordingly.

* All LMV/ Cars /SUVs will avail parking facilities at the parking places at Jagannath Ballav, Saradhabali, Yatrika, Blue Flag beach and Dighabarini. They will be diverted as per availability of space in parking places accordingly.

* No vehicle zone will be ensured from Marchikut Chakk to Jaga Balia lodge.

Significance and Rituals of Snana Jatra:

According to the Skanda Purana, Raja Indradyumna, who installed the wooden Deities, introduced the idea of giving Them a bath.

The deities are bathed with 108 pitchers of water drawn from a well situated near the Sitala temple in the confines of the Jagannatha temple.

There is a view that like all other major festivals in Odisha, Snana Jatra has direct links with agrarian calendar of the state and that the ritual bath signifies the onset of monsoon.

After the bath, the deities are dressed up in the Gajanana (elephant) or Ganesha Besha and their daily food offering or Bhogalagi is made on the Snana Mandap, in full public view.

After the Snana Jatra, the three deities are kept away from public view for 15 days and this temporary disappearance is called the ‘Anasara’ period. The popular belief is that after the ritualistic bath, the deities develop fever and therefore do not return to the sanctum sanctorum.

However, it is during this period that the ‘washed’ wooden deities get a fresh coat of colour before they appear in public in their new-look ‘Naba Joubana Besha’, a day before they set out on their chariots to the Gundicha temple.