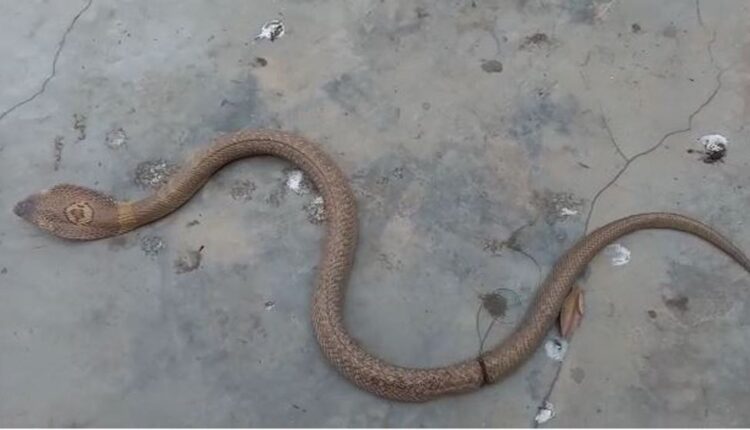 Bhubaneswar: A Monocled Cobra, popularly known as ‘Tampa Sapa’, who was trapped in a snare, found a new lease of life today, thanks to the prompt response of a Veterinarian and members of the Snake Helpline in Bhubaneswar.

As per reports, one N. Tirupati spotted the five-foot-long Monocled Cobra near his house located in Telugu Basti in Chili Pokhari area and sought the Snake Helpline’s help catch the snake yesterday evening.

Tirupati said, “For the past three days, I had been seeing the snake coming out of a hole close to my house during evening hours. Therefore, I sought the help of the Snake Helpline catch the Monocled Cobra.”

While rescuing the snake at around 5 PM yesterday, a member of the Snake Helpline, Arun Barala saw a plastic rope fastened to it, some one foot away from its cloaca. Barala then took the snake to the Snake Helpline head office. The snake was then admitted to the Veterinary College in OUAT where Surgery Professor Indramani Nath conducted an operation.

Nath said during examination of the snake it was found that a plastic rope was fastened around its body. However, there was no damage to bone structure. The snake’s skin and muscle layer were only affected.

“During an operation the snare was removed from the snake and medicine was applied to the injury. After an observation of three days, the snake should be released into the forest,” Nath added.

Subhendu Mallik, a former Honorary Wildlife Warden of Khordha, who was present during the operation, said it seems the snake was trapped in a snare meant for small birds.