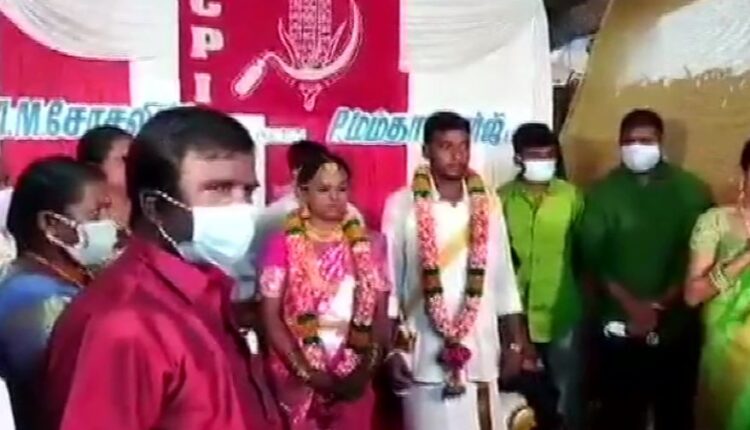 Chennai: The much hyped marriage between Socialism and Mamata Banerjee was conducted on Sunday in the presence of Communism and Leninism. Communism’s son Marxism was also present during the wedding.

The marriage was held at Amani Kondalampatti at Kattur in Salem district.

The wedding of Socialism and Mamata Banerjee was the focus of attention across the country following the uniqueness of their names.

Socialism’s father, A. Mohan is the Salem district secretary of the Communist Party of India (CPI) and had named his three sons as Communism, Leninism and Socialism and true to the family tradition, Communism named his son Marxism.

Interestingly, Mamata Banerjee is their distant relative and her father was a Congress worker and a die-hard fan of West Bengal Chief Minister, Mamata Banerjee. Mamata was earlier the firebrand leader of the Congress party and was the president of the Indian Youth Congress.

After the wedding invitation had come out, it went viral on social media and was picked by the media turning the marriage into a much looked after affair.

With the Covid protocol in place and lockdown in the state, the marriage turned into a low-key affair with only a few close relatives attending the event.

Socialism’s father, A. Mohan while speaking to IANS said, “We had to contend with a very few relatives and friends owing to Covid-19 protocol. Thanks to my son’s name, the marriage went viral and several people from across the country and abroad called me and wished the young couple all success in life.”

World Test Championship: Here’s what groundsman says about nature of the pitch