Solar storms in recent past may impact power grid 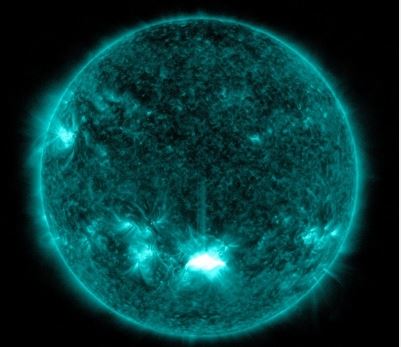 Washington: The Sun has since last week fired several rounds of solar flares, all which can lead to potential power grid fluctuations and irregularities in satellite orientation on Earth, media reports said.

This week, since November 1, the Sun has produced three of the outbursts that scientists call coronal mass ejections (CMEs), Space.com reported.

CME can be defined as a massive eruption of solar particles as a result of intense flares from the Sun aimed directly at Earth.

CMEs shoot globs of gas and magnetic fields out into space, often from sunspots, which are knots in the Sun’s magnetic field. On November 1 and 2, a sunspot designated AR2887 unleashed two of these outbursts. Then, later in the day on November 2, a second sunspot called AR2891 produced a CME as well.

That third outburst, called “cannibal”, is moving more quickly than its two predecessors, so it swept through all of one previous CME and part of the other, according to monitors at SpaceWeather.com.

All three CMEs have been headed more or less toward Earth, and scientists predict that the resulting large CME will arrive at Earth and produce geomagnetic storms beginning Thursday, the report said.

The US Space Weather Prediction Center (SWPC) of the National Oceanic and Atmospheric Administration (NOAA), which tracks CMEs and similar events, has declared a minor geomagnetic storm watch for Wednesday and a moderate watch for Thursday.

As a result of these storms, SWPC has warned of potential power grid fluctuations and irregularities in satellite orientation. The storms may also trigger stunning aurora displays of the northern lights as far south as New York, Wisconsin and Washington, the prediction noted.

The sun’s activity is governed by an 11-year cycle; currently, the sun is in what scientists have labeled “solar cycle 25.” This cycle is expected to peak in 2025, and early predictions suggested it would be a fairly moderate cycle, much like its predecessor.

The Sun emitted an X1-class flare, the most intense so far, NASA said in a statement on Friday.

“POW! The sun just served up a powerful flare,” the US space agency said in a tweet.

The X1-class flare caused a temporary, yet strong radio blackout across the sunlit side of Earth centred on South America, according to SWPC.

Lower, upper KG classes in Karnataka to open from Nov 8