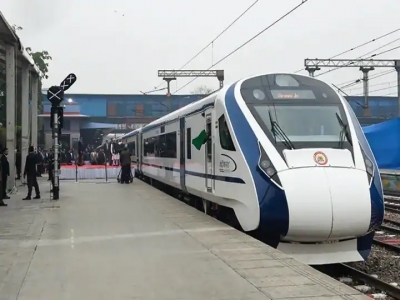 New Delhi: As per the Indian Railways, the premium service of the Vande Bharat Express connecting New Delhi and Jaipur will start soon, which will reduce the travel time between the two cities from four hours to just two hours.

Travelling by other trains on the New Delhi-Jaipur route normally takes about four hours.

Union Railway Minister Ashwini Vaishnaw said: “Vande Bharat is an excellent train. It can travel 0-100 km in 52 seconds, while other trains in the world take 54 to 60 seconds. India’s designs are even better than aeroplanes. It can provide the most comfortable travel experience.”

Prime Minister Narendra Modi, during the inauguration of Secunderabad-Visakhapatnam Vande Bharat Express, said that seven Vande Bharat trains (running already) had covered a cumulative distance of 23 lakh km, which is equivalent to 58 rounds of the earth.

Modi added that more than 40 lakh passengers had travelled in these trains so far.

They are equipped with indigenously designed, modern passenger amenities.

The Railways is planning to run 400 such trains across India, in the next three years.