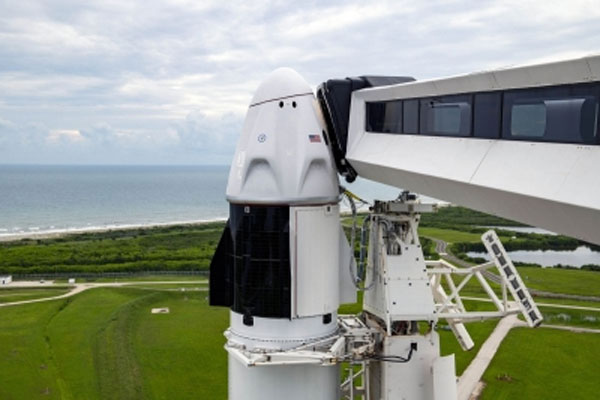 San Francisco: SpaceX, run by tech billionaire Elon Musk-run, is all set to launch to orbit its first all-civilian mission ‘Inspiration4’ on Wednesday. It will be the first completely private mission to orbit.

The Inspiration 4 crew is slated to launch Wednesday at 8.02 p.m. ET atop SpaceX’s Falcon 9 rocket, reports The Verge.

Jared Isaacman, a billionaire entrepreneur and philanthropist, booked the Crew Dragon capsule last year and picked three normal folks to ride with him. The exact price he paid SpaceX hasn’t been disclosed, but it runs into the tens of millions of dollars.

Since the Dragon will not visit the International Space Station, unlike previous Crew Dragon missions, its docking port was removed and replaced with a dome window.

The window, inspired by the Cupola on the International Space Station, will provide the crew with incredible views of Earth, according to the Inspiration4 team.

Issacman, Arceneaux, Proctor and Sembrowski are set to arrive at Kennedy Space Center on September 9, ahead of their planned launch, the report said.

The company’s Ax-1 mission, also planned for the end of 2021, hosts a crew of four private astronauts paying $55 million each for an eight-day trip to the ISS.

In 2018, Musk also announced Japanese billionaire Yusaku Maezawa will hitch a ride around the moon on SpaceX’s new rocket system Starship, which is under development.

Flood-like situation in Odisha as rivers swell after heavy rainfall

Elon Musk to send 1st all-civilian mission to space this…