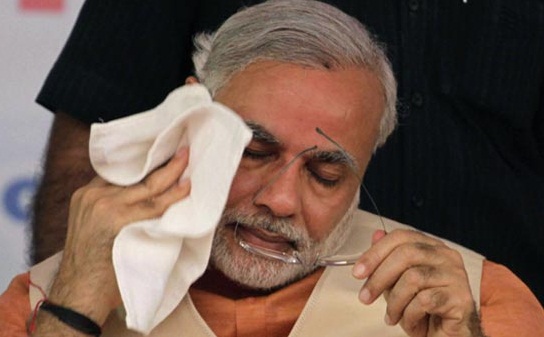 New Delhi: Lok Sabha Speaker Sumitra Mahajan on Wednesday accepted a no-confidence motion moved by the Opposition against the Narendra Modi government and said that discussion and voting on it will take place on Friday.

Mahajan, who took up the issue after the question hour, said she had received notices from Opposition MPs expressing lack of confidence in the Union Council of Ministers, and that she was duty-bound to put it before the House.

She said Kesineni Srinavas of the Telugu Desam Party was the first to give his no-confidence notice and asked him to move the motion supported by over 50 members, including those from Congress, Trinamool Congress, Nationalist Congress Party, Samajwadi Party, Aam Aadmi Party and CPI-M.

Mahajan said the notice has been accepted. She said she will notify the day and time of discussion and voting, but within the stipulated 10 days.

However, when the House reassembled post-lunch, the Speaker announced that the discussion and voting on the no-confidence motion will take place on July 20. Question hour will be suspended on the day.

Trinamool Congress member Dinesh Trivedi urged her to change the date, saying the party MPs will attend the Martyrs’ Day rally in Kolkata on July 21 and would not be able to take part in the debate on July 20.

He was supported by other Opposition members. Mahajan said she had noted the concern of the Trinamool member.

Parliamentary Affairs Minister Ananth Kumar said the time and date of discussion had been decided in the business advisory committee and added that those who had given notice for no-confidence should be ready to discuss it any time.

Earlier, speaking in the pre-lunch session, Kumar had said that the government was ready to face the no-trust motion.

“Everything will be clear after the discussion. I want to make it clear in the House that the people have full confidence in Prime Minister Narendra Modi’s government,” Kumar said.

Congress leader Mallikarjun Kharge, who had also given a notice for no-confidence motion, told the Speaker that she should have “taken together all notices at a time.”

Mahajan said she had followed the rules.

no confidence motion against Modi government