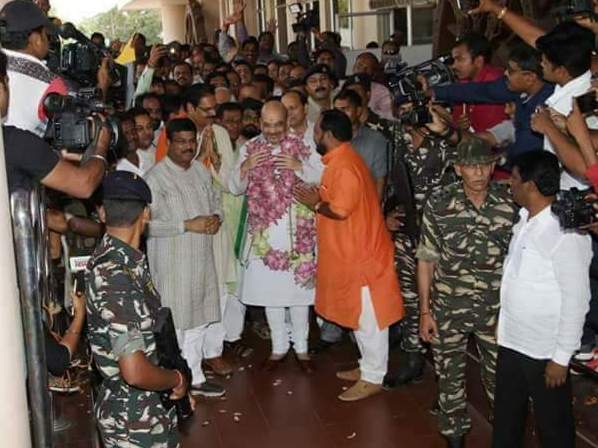 While BJP national president Amit Shah arrived at the Odisha capital to a rousing welcome this noon ahead of the two-day national executive meet beginning tomorrow, the saffron party leaders garlanded Shah with lotus flowers tagged in specific numbers indicative of its plans to sweep polls in the eastern state in 2019.

The chief strategist of the BJP was decorated with two sizes of lotus garlands – 21 and 147. Incidentally, the numbers amply suggest the assembly and Lok Sabha seats in the state which the national party is hopeful of pulling it off.

“Each lotus in the garland was symbolic of the assembly and Lok Sabha constituencies in the state and we aim to win them in the next elections. We offered the lotus garlands with 21 and 147 blooms to Amit Shah Ji asking him to help us win them,” a party leader expressed.

In the backdrop of the overwhelming electoral success in the last panchayat polls in Odisha, the BJP has channelised its maximum energy towards the state – with eyes set on 2019 twin elections.

The BJP has shifted its focus to the east after its success in recently concluded assembly polls in five states. Several Union Ministers have been frequenting the state on official and party programmes ostensibly to reshape people’s perception and begin groundwork to better their numbers given the fact that it had won a single seat in Lok Sabha and 10 assembly constituencies.

Later in the day, Shah held meetings with state leaders and office bearers at state headquarters. He also had closed door meeting with state unit president, vice-presidents and secretaries at a private hotel here prior to the national executive meet scheduled to take off tomorrow.