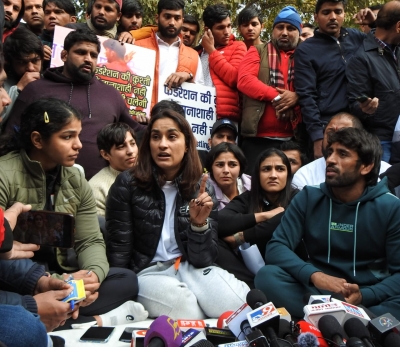 New Delhi: The Sports Ministry on Wednesday sought an explanation from the Wrestling Federation of India (WFI) “within the next 72 hours”, after Olympian wrestler Vinesh Phogat levelled serious allegations of sexually harassing female wrestlers against the sports body’s coaches and chief Brij Bhushan Sharan Singh.

The Asian Games and Commonwealth Games gold medallist broke down while speaking to reporters on Wednesday, as more than 30 wrestlers, including Olympic medallists Sakshi Malik and Bajrang Punia, staged a protest at the Jantar Mantar here.

Vinesh said she was subjected to mental harassment by Brij Bhushan Sharan Singh, adding that she had even contemplated suicide.

“Adhyaksh (WFI President) and a few coaches in the national camp have sexually exploited female wrestlers,” she said.

“No one takes responsibility for injuries. They talk of banning wrestlers from nationals. The WFI President called me ‘khota sikka’ (useless). I wanted to commit suicide.

“I’ve openly said it today, I don’t know if I will be alive tomorrow. We have requested many times to move the camp away from Lucknow. Why does it happen only there? Because it’s easy for him to prey on the women wrestlers,” she added.

Hours after the protest, the Sports Ministry in a statement made it clear that if the WFI does not respond within the next three days, it “will proceed to initiate action against the federation in terms of the provisions of the National Sports Development Code, 2011”.

“Taking cognizance of the protest staged by wrestlers, including Olympic and CWG medalists, in Delhi today and a press conference in which wrestlers have levelled serious charges of sexual harassment of women wrestlers by the President and coaches of the Wrestling Federation of India (WFI) and of mismanagement in the functioning of the federation, the Sports Ministry has sought an explanation from WFI and directed it to furnish a reply within the next 72 hours on the allegations made,” the sports ministry said in a statement.

The Ministry has further stated that if WFI fails to furnish the reply within the next 72 hours, the Ministry will proceed to initiate action against the federation in terms of the provisions of the National Sports Development Code, 2011,” it added.

Amid the protest, the ministry has also cancelled an upcoming wrestling camp for women wrestlers.

“Further, the Women National Wrestling Coaching camp, which was due to start in Sports Authority of India’s National Centre of Excellence (NCOE) in Lucknow from January 18, 2023 with 41 wrestlers and 13 coaches and support staff, has been cancelled,” it said.

“The Executive Director of NCOE Lucknow has been directed to provide all facilities to national campers who have already reported and likely to report, till the campers depart from the centre. Necessary information regarding cancellation of the National Coaching Camp has also been sent to all campers,” it added.

“I have been given death threats since I complained to the Prime Minister regarding harassment,” she said.

The wrestlers are demanding change in the WFI administration and appealed to Prime Minister Narendra Modi and the Sports Authority of India to take action against the WFI chief.

Brij Bhushan Sharan Singh has been in charge of the WFI for nearly a decade. The 66-year-old, who was elected unopposed as the WFI President for the third time in 2019 for a three-year term, brushed aside the allegations of sexual harassment levelled against him by top Indian grapplers, saying, “I will hang myself if the allegations against me are proven.”

“When I came to know that wrestlers were protesting, I didn’t know what the allegations were all about,” Sharan told reporters here.

“This is a conspiracy against me, and a big industrialist has a hand in it. When Vinesh Phogat had lost, it was me who motivated her. I will talk to the players. I am ready to face any kind of investigation. Sexual harassment never happened. If even one athlete comes forward and proves this, I will hang myself,” he added.