Sreesanth writes to Vinod Rai for revocation of ban 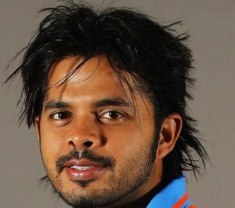 Tainted Indian speedster S. Sreesanth has written to former Comptroller and Auditor General Vinod Rai, who heads the Supreme Court-appointed Committee of Administrators (COA) of the Indian cricket board, seeking justice as he has lost four years, when he should have been playing cricket at the highest level.

Sources close to him reveal that he is deeply upset at the way the outgoing leadership of tghe Board of Control for Cricket in India (BCCI) treated him, especially denying him an NOC to play in the ongoing Scotland Cricket league.

In 2015, a Delhi court exonerated Sreesanth and two other players in the case registered by the Delhi Police which invoked the Maharashtra Control of Organised Crime Act (MCOCA) after he was arrested for spot fixing in the 2013 edition of the Indian Premier League .

With a change in the guard at the BCCI and Rai, an IAS officer who served in Kerala for long, Sreesanth expects that he will be able to persuade Rai on the injustice meted out to him.

Sreesanth is determined that if this attempt also fails, he will have no other alternative but to seek judicial intervention for lifting the ban on him.

On account of the life ban, the pacer cannot play even league cricket nor get access even for practice to any of the cricket grounds where the BCCI or the State Cricket Associations have a stake.

It was the BCCI Disciplinary Committee headed by the present Union Finance Minister Arun Jaitley that slapped a life ban on Sreesanth.

Sreesanth was expecting a favourable stand from the BCCI which was headed by BJP lawmaker Anurag Thakur after he contested the May 2016 Kerala Assembly elections on a Bharatiya Janata Party (BJP) ticket from the prestigious Thiruvananthapuram seat and finished third, but things did not go the way he wished for.

Sreesanth is just the second Keralite to represent the country. The 34-year-old has played in 27 Tests taking 87 wickets, and picked up 75 scalps from 53 One-day Internationals (ODIs) and seven wickets from 10 Twenty20 Internationals (T20Is).

Will be happy to debut against Australia: Pandya