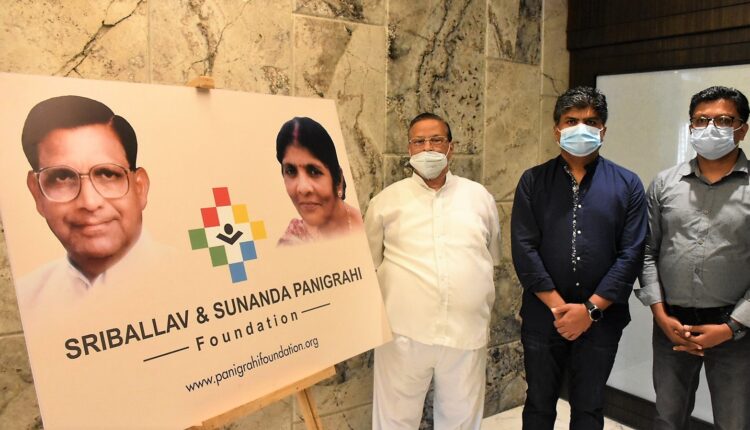 Bhubaneswar: Late Sriballav Panigrahi, eminent Congress Leader, Minister, Parliamentarian & Trade Unionist, who had the distinction of being India’s youngest Cabinet minister at the age of 32 in 1973 has been remembered through the establishment of a foundation – Sriballav & Sunanda Panigrahi Foundation.

The foundation will promote values and ideals that were close to the hearts of Sriballav Babu and Sunanda Devi. Among other things, it will aim to promote probity in public life, good governance and try to empower the marginalized and deprived sections of the society particularly through education.

The major objectives of the foundation are:

1. Create and promote enlightened public opinion on various issues affecting the people particularly related to probity in public life and good governance – through its flagship program – ‘The Annual ‘Sriballav Panigrahi Memorial Lecture’. An eminent personality will deliver an address on important and pertinent topics.

2. Recognize and reward social workers/activists/educationists/writers/talents in the field of art and culture etc. with the annual ‘Sriballav& Sunanda Panigrahi Samman’. An independent jury of eminent personalities will select the awardees. The award shall consist of Rupees One Lakh and a citation and will be given away in the annual lecture. This step moves to recognize the unsung heroes of the society who are quietly going around doing their work in enriching and enhancing human lives in their own way.

3. To inculcate a sense of dedication, integrity, and honesty among elected public representatives/officials through training. Eminent personalities will be invited to share their experiences and knowledge with elected representatives like Legislators/Zilla Parishad Members/Sarpanches etc. and instill a sense of ownership and dedication in their duties towards their people.

4. To provide financial assistance in the form of scholarships/aid for economically backward meritorious students – particularly children who are without their parents and guardians.

Niranjan Patnaik said, “I was associated with Sriballav Babu since 1960 as a classmate and close friend and was with him till his last breath. He had tremendous interest in social service. Known for his honesty and integrity, he was a leading leader of our times. I am happy at the launch of this foundation by his sons, family members and friends which will keep preserve their memories and help the spread of the values that they stood for all their lives. Sunanda devi was a highly qualified educationist who devoted her life to education, and I do miss both of them very dearly.”

‘Sriballav Babu was an excellent student and used to get scholarships in all his examinations’ said Raseswari Panigrahi. “He stood for honesty and integrity and was a man of principles who never compromised on them till the end. The foundation will seek to promote these values.”

As per Priyadarshee Panigrahi (elder son), some of the objectives of the foundation, like providing training to elected representatives on their responsibilities, providing good governance etc. are unique and shall make an impact in improving the lives of the people. The foundation also seeks to recognize and reward unsung heroes who are making an impact on the society.

Rajarshi Panigrahi (younger son) said, “The principles of our parents, remain highly relevant even today. We seek to present them in such a way that they become an inspiration to the current generation.”

Born on 2nd September, 1940 into a freedom fighter’s family at Bargaon village, about 14 kms from Sambalpur, Sriballav Babu was a self-made man, who rose through the ranks through hardwork.

Starting from being the youngest president of any District Congress Committee in India (he became Sambalpur, DCC president in 1967 at an age of 27) to reaching Parliament, Sriballav Babu climbed the political ladder through his merit.

He became India’s youngest Cabinet Minister when he joined then Chief Minister Nandini Satpathy’s Cabinet, in the year 1973 when he was 32 years old and went to handle many important portfolios like Revenue, Irrigation & Power, Law, Education, Parliamentary Affairs, Food & Civil Supplies and Commerce between 1973-77.

He went to the Lok Sabha for three terms, in 1984, 1991 and 1996 where he made a mark for himself on the national platform. An excellent orator, he was used by the party to put forth its views on many important debates in the Lok Sabha. He was nominated to be the Chairman of the Parliamentary Standing Committee on Petroleum and Chemicals (1993-96).

He was also an active Trade Unionist. He was the President of the OCMS (Orissa Collieries Mazdoor Sangh) which was among the largest trade unions in Odisha.

He was also an educationist. He was the President of the New Life Education Trust which handled more than 500 Aurobindo Schools across the state of Odisha.

Sriballav Babu’s wife Sunanda Panigrahi was an educationist and writer. She was the daughter of noted essayist, litterateur, poet-author Nilamadhab Panigrahi. Designated as ‘Kosali-Vyas’ for having single-handedly translated the epic ‘Mahabharat’ into Sambalpuri-Kosali language, Nilamadhab Panigrahi inspired Sunanda Devi’s career and literary pursuits. A dedicated teacher, Sunanda Devi retired as the reader of English of Govt. Women’s College Sambalpur. Being very fond of education, she was the honorary principal of Sri Aurobindo Inter College till her last breath on 15 September, 2015.