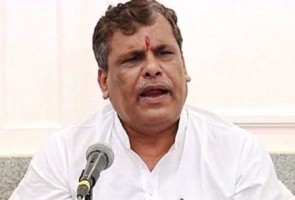 My friend Srikant Jena is incoherent in his counter to my other dear friend Mani Shankar Aiyar.  Srikant has written an NDTV opinion column on how Mani is wrong about the Congress analysis. Srikant has brought in the idea of a mahagathbandhan to counter the Modi surge.

In year 2004 Srikant Jena had been politically kicked so hard by Naveen Patnaik that he had lost his relevance in politics. In August 2006 it was I who had invited him for an Odia association Ganesh Puja get together in Gurgaon and his name had then re-appeared in the news papers after a long gap. The same was just a few days after the demise of my grandmother Legendary Nandini Satpathy. In Nov 2006 J.B Patnaik in consultation with Sonia Gandhi, had formally inducted me into the Indian National Congress.  Odisha Panchayat Elections 2007 were lead by J.B Patnaik, the likes of me had worked hard and back then the Congress had done well in the same. At that time the Odisha Congress was on an ascend mode and was putting out a strong fight against the BJD-BJP coalition which was on the ruling side in Odisha. In year 2008, it was I and a few others in the Odisha Congress, who had invited Rahul Gandhi for his maiden political tour to Odisha. Back then, we had worked really hard to build brand ‘Rahul’ in Odisha and we to an extent were successful in the same. Ashok Tanwar, Jitender Singh and others from the central pool of INC were associated with us during that tour of Rahul Gandhi. All was going great for the Congress, till Srikant got to his antique of kicking the plate he ate in. He had done the same with Biju Patnaik too. By the way if you didn’t already know, Srikant is a prodigy of Biju Patnaik and from the very beginning of his political career, he was in the extreme wrong side of the Congress party. I am sure, the ones who closely watch Odisha politics are well aware about how Srikant despite being Biju’s close confidant had sabotaged Biju’s quest of becoming the PM of India.

It is an open secret that Srikant  on an INC ticket won his MP election from Balasore in year 2009 only because Naveen Patnaik had not fielded a BJD candidate against him. Srikant was the sole Minister from Odisha in UPA-2. Everyone shall resonate that ever since the 2009 general elections, INC has gone to the pits. Till date its degeneration has still not been arrested.

March 2014, I put in my resignation paper with the INC President. I no longer am a part of INC. The current INC is a party infested with people who strongly believe in the non-Congress ideology and those who stand with the ethos which is contrary to that of INC constitution. Need I say more on why the Congress is in its current pathetic condition?

I have nothing against the BJP, INC or for that matter against any other political party, just that I strongly feel that every political party must be guided by strong ethics, morals and ideology. Any political party which dilutes or compromises on the same is bound to face the fate of what the INC is facing today.

Srikant via the said column has struggled very hard for the upkeep of his political relevance but he along with all other political leaders who share his kind of mindset must stop thinking that they can fool everyone every time.

*The author is a noted and highly respected socio-political leader from Odisha. He is the former Convenor of PMYSA-Odisha MoPR, Govt. of India and the Chairman of SNSMT. He is currently affiliated with Ama Odisha Party and is a former member of the Indian National Congress. He can be reached on Facebook & Twitter @SuparnoSatpathy

‘Pluto a planet, and so are over 100 celestial bodies’