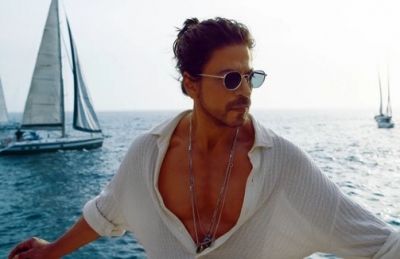 In the picture, SRK can be seen in a casual beachwear look donning a white shirt with rolled up sleeves, a pair of black sunglasses, a light stubble with hair tied up loosely in a bun.

The look is from a new song from ‘Pathaan’ titled ‘Besharam Rang’ which is due for release on Monday. SRK, who plays a gun-toting spy with a licence to kill in ‘Pathaan’, is presented as the king of cool in the song.

Talking about SRK’s prep for the film, director Siddharth Anand said, “SRK will be seen letting his hair down with Deepika in this party track of the season. He has pushed his body for the film to be his fittest best and has also flaunted an eight pack in this song as well which should get his fans very excited to see their idol looking the way he is in ‘Pathaan'”.

About the pairing of SRK and Deepika, Anand said, “His chemistry with Deepika in the song is infectious. They are considered one of the all-time biggest on-screen jodis in the history of Hindi cinema, given their massive blockbusters, and this song presents them to their fans and audiences in a way that they have never seen before on screen. I am eagerly awaiting to see the reaction of people when the song drops tomorrow!”

Produced by Yash Raj Films, ‘Pathaan’ also stars John Abraham and will arrive in cinemas on January 25, 2023 in Hindi, Tamil and Telugu.