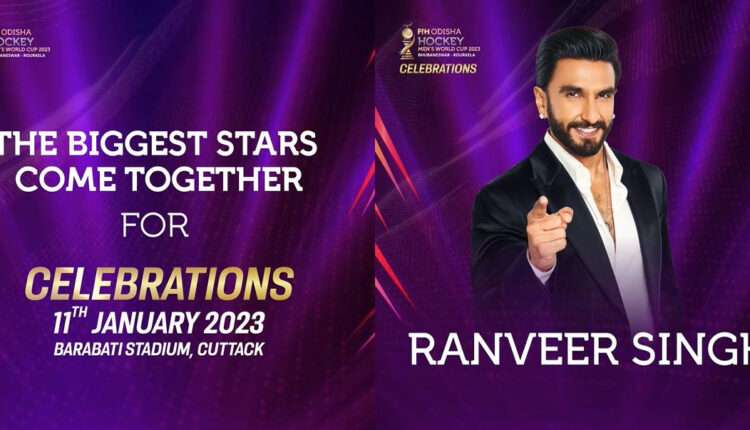 Bhubaneswar: With FIH Odisha Hockey Men’s World Cup 2023 all set to commence from January 13, 2023 in Bhubaneswar and Rourkela cities of the State, a world class celebration to commemorate the beginning of this mega sports event will be held on January 11, 2023 in Barabati Stadium, Cuttack.

As part of organising the hockey tournament itself, an action-packed show that serves as an introduction to both the guest nations as well as our nation as a whole will be held! In doing so, the celebration is set out to create an incredible display of showmanship, festivity, technology and culture, a source said.

Aptly titled ‘Celebrations’ the show will serve as the precursor event to the opening of the tournament itself on 13th Jan, 2023, with a star-studded cast lined up for all manner of performances, songs, dances, and technology; all while incorporating the cultural aspects of Odisha.

Serving as the host nation of the Hockey World Cup for the second consecutive time, India, and more specifically, Odisha, has taken every measure to ensure that our guests from the 15 visiting nations will bear witness to one of the most spectacular shows ever created.

‘Celebrations’ will take place on the 11th of January, two days before the official commencement of the tournament on the 13th of January. The show incorporates aspects of traditional Odia music and dance, as well as the use of innovative new technology during the show that is sure to create a spectacle that will leave audiences awe-struck.

While the show will be broadcast across national TV channels, those present in the Barabati Stadium in Cuttack, Odisha, will get the full experience of the show amongst ecstatic fans in the stadium.

“The Celebration is an integral part of the tournament as it symbolises our pride in both our state and in our nation for playing host to the Hockey World Cup for the second consecutive time. With stars from local film industries, Bollywood, traditional singers, and even acts from overseas, this promises to be a show that you won’t want to miss. It gives me great pride to offer a warm welcome to all our national and foreign guests as one of the hosts of the tournament and invite them to come celebrate the spirit of hockey with us!,” Hockey India President Padma Shri Dr Dilip Tirkey said.

Amongst the stars is Pritam, the writer and composer of the Hockey World Cup 2023 Song, who will take the stage and enthral us along with incredible vocalists like Benny Dayal, Neeti Mohan, Lisa Mishra, Amit Mishra, Antara Mitra, SreeramaChandra, Nakash Aziz and Shalmali Kholgade along with Namita Meleka from Odisha. Guru Aruna Mohanty and National Award winner Shiamak Davar have choreographed the dance performances. The event will also feature many local Odia stars and performers.

“Along with the stars, we have produced technology-based shows that are immersive and awe inspiring. So, as we mark the opening of the Hockey World Cup 2023 here in Odisha, we hope that you will join us and be part of the ‘Celebrations’ on the 11th of January,” the Hockey India chief Tirkey added.

Notably, tickets for the event celebrations will be available only online starting December 28, 2022 at 12 noon on Paytm Insider.