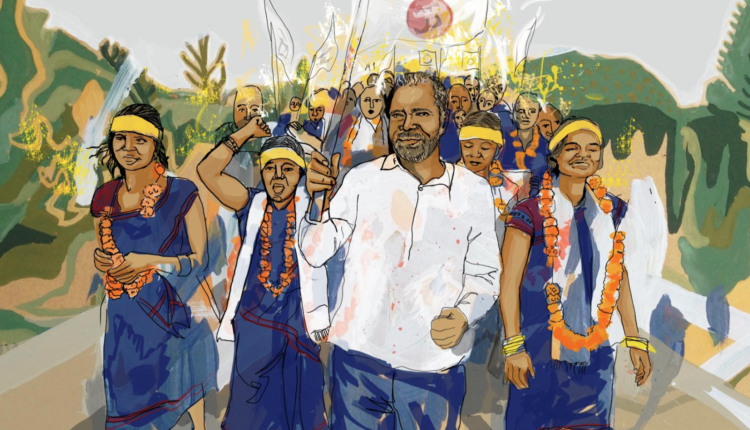 There is an article titled Step Sons of the Soil, written by Akash Poyam and published in The Caravan which critically analyses various high-risk government jobs in which urban upper-castes drive Hindutva nationalism but have hardly any representation among those that are adversely affected on the job. Journalist Ajaz Ashraf analysed the social backgrounds of those affected specifically in the Pulwama attack in an article titled “Urban upper-castes driving Hindutva nationalism have little representation among Pulwama’s slain jawans.” Ashraf observed that while those propagating hyper-nationalism on social media are often upper-caste and upper-class, the soldiers who had lost their lives in the attack predominantly came from marginalised communities, such as Scheduled Castes, Scheduled Tribes and Other Backward Classes.

Rightwing media houses such as Republic TV and Times Now criticised the article and termed it “anti national” and “casteist” but conveniently ignored the argument it was making. In Step Sons of the Soil, this is used as a premise to delve into the rabbit-hole of casteism and discrimination in various high-risk government jobs. Initially, I was of the opinion that such jobs do not have any place for one’s caste or class and must be entirely nationalistic and those working in such institutions must identify themselves as Indians and nothing else; I backed this up with Moses Dhinakaran’s tweet in response to the article.

Dhinakaran was then the deputy inspector general of the CRPF, his tweet read, “We in CRPF identify ourself as Indians. Not more, not less. This pathetic divisiveness of caste, color, and religion doesn’t exist in our blood. You should strictly refrain from insulting all the martyrs. They are not statistics for your demeaning and meaningless write-up.” However, upon reading the article I came to realise that what I felt came from a place of privilege, there is so much that goes on behind the scenes that people like us do not even realise.

Republic TV and Times Now, two largely upper-caste Hindu newsrooms ran stories anchored by upper-caste Hindu men and criticised the article without even addressing that perhaps what the article tried to point out may be, at some level, onto something. Arnab Goswami called the article anti-national and claimed that the Pakistan army was using The Caravan to put forth their agenda to attack India. While the claim was absurd, it was hardly surprising due to the sheer ignorance that most upper-caste Hindus consume themselves with from their place of privilege. I now am in complete agreement with the article. My main thesis is aligned with the article which mainly argues that marginalised communities predominantly suffer and are more vulnerable as compared to upper-caste and/or upper-class security personnel in the armed forces and other high-risk jobs.

Poyam’s had first hand experience of the trauma and injustice faced by adivasi security personnel and their families when his relative Hemanth who was working as the sub inspector in Dantewada, a maoist affected area went missing, they were told that had been caught alive by the Maoists and taken inside the forest. His body parts were found a couple days later strewn around in the forest. Another relative of his, Chandrabhan, who was posted in Bastar with the Chhattisgarh Armed Force, left his job and returned to Jamgala after Hemant’s death. Hemant’s death was only one among a series of similar violent incidents he had witnessed. After a few years in the village, he moved to a private job.

It is evident from this that those who want to work for government security institutions also give up and move on because they fear for their lives. “It is not just the police. In just about every force working in insurgency-prone areas, those from marginalised groups are most at risk.” It is important to note that the government and its various security institutions claim that in order to control areas affected by major violence, they must employ those that already belong to the area as familiarity may be helpful to control violence in these areas.

While it may seem to be an understandable analogy, more often than not, it is used to pit people against their own community so as to occupy more and more territory, which the government has done from its experiences in other conflict regions. It is perhaps due to these selfish and conniving reasons that many marginalised communities suffer and remain marginalised, they are not given an opportunity for self growth individually or even as a community. In 2015, as a part of “Make in India” and “Make in Chhattisgarh” projects, memorandums of understanding worth rupees 24,000 crore were signed at Dantewada in the presence of Mr. Modi in the hopes to be able to snatch away all the natural resources of the tribal people in order to increase corporate super profits and gather rich resources to earn in exports; this further exploits communities that have been living there for generations in order to further their capitalist agenda.

Additionally, the Chief Minister of Chattisgarh has suggested on multiple occasions that the Adivasi community is taken advantage of due to prevalent illiteracy in the community. One of his tweets read, “We can’t take away opportunities of growth & development from people of regions like Bastar on grounds of conservation of culture.” Rampant poverty has created conditions in which unimaginable violence for a little bit of money is quite normal.

Those who grow up around violence become desensitised to it. The government gives out bounties for every dead body, creating people who are conduits for state brutality. “Many activists and academics have argued that the counterinsurgency in Bastar is primarily to acquire control over Adivasi land in order to exploit its resources.” The District Reserve Guards often tell villagers that they have come for hunting and won’t leave without killing someone.

An Adivasi can earn lakhs of rupees as bounty, and promotion, for “hunting” another Adivasi. Eventually, this turns into a sport. It basically reveals insensitive and oppressive attitudes of those that hold power and the very fact that there is little or no attempts at empowering marginalised communities, they are instead taken advantage of and examples of violence by them is used to demonise and alienate them from the rest of the country.

Its almost like a back-alley dog fight! The government has the power to take suitable steps to educate and empower these communities so that they do not have to turn to violence for money or justice, but they choose to exploit them instead because not educating them fits their personal agendas, it gives them immediate economic growth and allows them to continue to capture more territory and capitalise on it.

Similarly, Manmohan Singh, India’s former Prime Minister termed Maoists the “country’s biggest internal-security threat,” and P Chidambaram, India’s former Home Minister called them “savages” a term historically used as a racial slur to describe Adivasis. Chidambaram was once part of the legal team for Vedanta, a company that has been accused of forcibly acquiring tribal land for mining and of causing environmental damage affecting hundreds of thousands of Adivasis.

In addition to this, in 2005, the Chhattisgarh state government formed a militia in Bastar consisting of surrendered Maoists and youth Adivasis called it the “Salwa Judum”; their main intention was to fight Maoists and Naxalites. The Chattisgarh government used more than 12,000 minors and in the following years there were several allegations of human right violations like rape, killing and burning of villages and a total of 644 Adivasi dominated villages were affected by the Salwa Judum attacks. During these years, Naga and Mizo Indian Reserve Battalions which largely consist of tribals from the northeast were also deployed in Bastar.

“These battalions were know for their expertise in guerrilla warfare. Several cases of human-rights violations were filed against them.” This is evidence of officials using one marginalised community to grapple with their own community or another marginalised community. SRP Kalluri, then the inspector general of Bastar, noted in 2018. “They are familiar with the culture, ethos and language of people. Having a bond with the Adivasis, they are better mentally conditioned to handle them. They are fighting Maoists efficiently because of their inherent motivation for doing so.” As of January 2007, according to a report, 47,238 people were living in 20 Salwa Judum “relief camps.”

Furthermore, privilege plays a major role in determining the success (and safety) of an individual. A senior CRPF officer in Chhattisgarh stated that there are two kinds of postings after training – office posting and field posting. The field postings are in three regions: Jammu and Kashmir, Maoist-affected areas and the northeast. Similarly, in the Chhattisgarh police, all recruits must serve three years in a Maoist-affected region, after which they can be posted at an office, or a less dangerous area. In order to get an office posting, one must have some knowledge of technology, typing and have other skills that those less fortunate lack due to inaccessibility to these resources.

They are then recruited as field officers usually posted in dangerous areas merely because they are familiar with the people and area. Many upper-caste and upper-class recruits get away with not being posted at these Maoist-affected areas because they use their contacts and privilege of these extra sets of skills. One villager stated that people can easily identify District Reserve Guards and other officials as they are from the same community and surrounding village. This essentially means that due to the fact that those from marginalised communities do not have the contacts, money or skillset to get away without having to be posted in incredibly dangerous areas, many are stuck there all their lives because of the mere fact that officials believe that they are a right fit for that area because of their familiarity with that area.

In conclusion, it is my belief that the state and central government play a major role in the exploitation of marginalised communities especially in Maoist-affected regions, Jammu and Kashmir and the Northeast. The victims of many violent encounters between paramilitary forces and insurgents have been predominantly Dalits, Adivasis or OBCs and self-avowed nationalists conveniently ignore the statistics and argue that there is a shared identity among security personnel as “Indians”, however, they come from a place of privilege.

In addition to this, government officials have been exploiting marginalised communities and pit them against each other in order to capture their land and capitalise at the cost of their lives and development. The article highlights the abuse of and hunger power, hunger for money and deep rooted stereotypes and discrimination in society. It also tackles the issue of corruption especially in institutions such as CRPF, the police force and the armed forces – a large price of which Adivasis, SCs, STs and OBCs have to pay. What is more is that there is barely anything being done for the development and empowerment of these communities, and they will continue to remain backward for as long as the privileged are given better jobs and better pay. Violence for money and justice will continue in these regions essentially because “if not this, what else?”

Making a case for Jallikattu