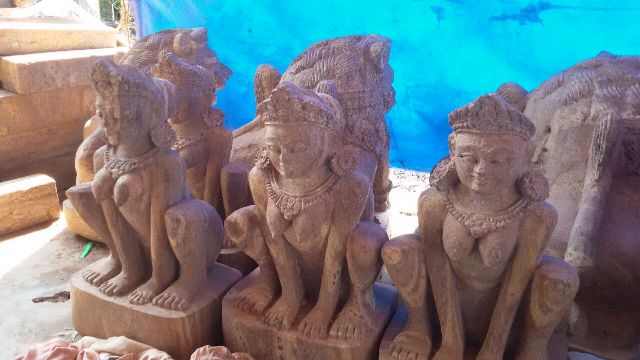 Khordha: Future of hundreds of stone artisans in Narangarh village remains in dark due to faulty policy of the government affecting the stone carving and sculpture in Odisha.

Over 500 stone artisans strive for their livelihoods as they lost their occupation due to unavailability of baulamalia stone, which has obtained the Khandolite Decorative Stone status.

The sound erupts during stone carving is no more audible in Narangarh village, the birth place of the stone sculpture and carving. Several artisans are migrating to other states in search of job and the government is yet to wake up from its deep slumber.

Sources said that Odisha Mines department has put restriction on raising the Baulamalia stone from the hill after it was granted the Khandolite Decorative Stone status in Narangarh village, which comes under Jagannath temple administration.

Utkalika had obtained the license from the government to lift the stone from here during 2013-14. After one year, the license was withdrawn from it. Since the year, the prospecting license has not been given to any firm or institution for lifting the stone. As the government could not take a concrete decision regarding it, the stone artisans are not able not get the Baulamalia stone to continue their occupation. The artisans are now spending their time with difficulties in the past three to four years, said social activist Lingaraj Kodamasingh.

It will be difficult for the stone artisans to manage their families without work if the government will not consider their condition and make arrangement for supplying stone for their livelihoods, Kodamasingh said.

With the continuation of such situation for a long period of time, not a single stone will be available for Jagannath temple renovation or repair work, he added.

7 handicrafts made in Odisha, admired world over