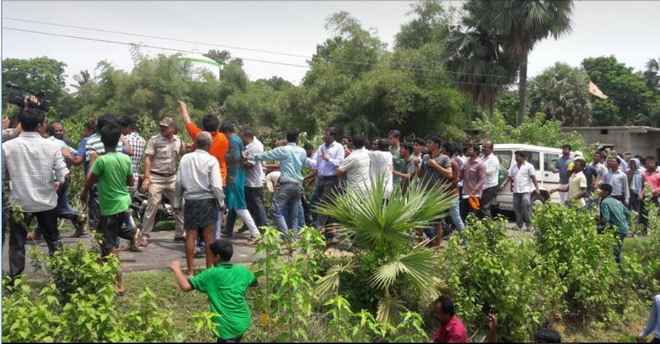 Tension gripped the spot following the incident as a clash erupted between the supporters of the MP and the MLA with pelting of stones at each other.

MP Panda reportedly fell down in the incident.

According to sources, supporters of Jena committed the act alleging that the MLA wasn’t invited for the inauguration.

However, Panda refuted the allegation and said the plaque of the project bore the names of local MLA and officials and he always ensured that they are invited.

“The project will solve the drinking water problem in the area. Those opposing it will have to answer the public,” Panda said.

He also blamed bureaucrats for deciding the party affairs in BJD.

“I’ve been in the party since its inception. In the first 17 years, we had a policy to resist hooliganism and infighting. But in the last three years, many things have changed. Some babus sitting in the A/C rooms have started deciding the party activities leading to indiscipline,” Panda told reporters.

“These are not good signs. I had apprised the matter to the party chief (and Chief Minister Naveen Patnaik) and I am sure once he gets to know the truth, he will certainly take steps,” he said.

The MP took to Twitter and said he is not afraid of stones and eggs, not even bullets.

“Forget stones & eggs, they can’t cow me down even if they use bullets. These MPLAD-funded projects = 5.2 million litres of drinking water,” Panda tweeted.

Forget stones & eggs, they can’t cow me down even if they use bullets. These MPLAD-funded projects = 5.2 million litres of drinking water🙏🙏🙏 https://t.co/ZgldqkJGIQ

“Not officers but the party president and district level leaders decide on party activities. Whatever he is saying is purely personal,” said Patro.

Meanwhile, Health Minister and Mahanga MLA Pratap Jena, who was accused of orchestrating the attack on Panda, refuted the charge of the involvement of his supporters in the incident.

“I am in Shirdi to pay obeisance to Sai Baba. I am not aware of the controversy and related developments. I will respond once I return to Odisha,” said Jena.

Worth mentioning, uncertainty started hovering over the inauguration of the drinking water project after some miscreants demolished the stand of the plaque of the MPLAD-project late on Sunday night.

However, a day before the inauguration, the MP said via Twitter that he would inaugurate the project despite the incident.