Students march for right to access toilet in Odisha hotels 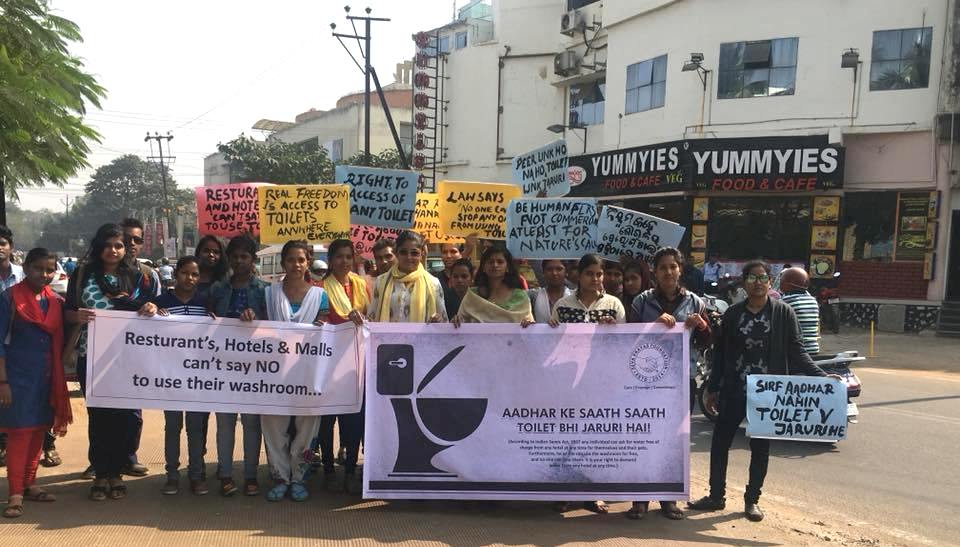 Bhubaneswar: A group of 50-odd students marched from Rama Devi Women’s University to Big Bazaar Square at Satya Nagar in Odisha capital this morning, protesting against the practice of some restaurants in here, prohibiting people from using their washrooms, if they are not guests.

Lead by social activist Linkan Subudhi, this toilet awareness campaign appealed to the restaurants and hotels in the city to let people use their washrooms in case of an emergency.

This movement began when two women were not allowed to access the washroom of a local restaurant in the city. One of them took to social media to vent her anguish.

“There have been multiple incidents where managers refuse point-blank or ask people to use Sulabha Sauchalaya (public toilets). “Especially in emergency, locating public toilets is impossible. Sometimes, they are locked, at others, people are uncomfortable using them because of hygiene issues,” said Linkan, who once was forced to rush into a hospital to use a toilet because the public toilet she went to, sported a huge lock on its gates.

She went on to explain that it’s not just restricted to women; differently-abled individuals, senior citizens and small children also face situations where they have an urgent requirement of a toilet. The owner and the manager of the restaurant remained unavailable to dialogue, when she tried contacting them.

Indian Sarais Act of 1876 empowers individuals to ask for water, free of cost for themselves and their pets and use washrooms, free of charge at hotels and restaurants.  “Since we are on the highway, we understand that people do not have access to toilets while travelling and therefore we welcome anyone who is in the need of one. However, we do not allow youngsters of opposite genders to enter washrooms simultaneously,” said Deepak Sahoo, owner of a Patia-based restaurant.

Rohit Srivastav, a known food blogger who is a regular at restaurants in the city pointed out that use of restaurant toilets by non-patrons has been enforced in Karnataka and South Delhi already. “Use of existing infrastructure such as toilets in restaurants will offload burden from municipal bodies. Restaurants, on their part, can probably have pay-and-use toilets for non diners charging a nominal fee. There are few restaurants in Bhubaneswar I know personally, who let non-patrons use their toilets and others should follow suit,” he added.

Linkan is also planning to submit a memorandum to the District Collector, Federation of Hotel & Restaurant Associations of India and the Health Secretary of the Odisha government on this pertinent issue.