Rourkela: As many as 250 students today performed Odissi on the Brahmani river bridge here to welcome the FIH Odisha Hockey Men’s World Cup-2023 trophy to the Steel City which is the second venue for the mega sporting event.

Many people including large number of students were seen standing on both sides of the road to have a glimpse of the trophy. The trophy reached Rourkela after travelling across at least 16 states and several districts of Odisha. 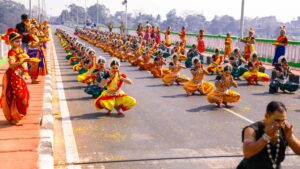 The Chief Minister also inaugurated the World Cup Village at the stadium. The village has 225 rooms to cater to the needs of players of officials during the mega event. 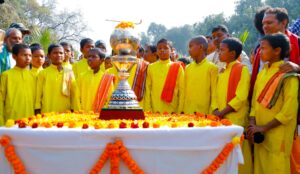 Altogether 20 matches of the men’s hockey world cup would be played at Birsa Munda Hockey Stadium, touted as the largest hockey stadium in the world while the remaining 24 matches, including the final, will be held at Kalinga Stadium in Bhubaneswar.

The Sundargarh district administration and Rourkela Municipal Corporation (RMC) have decorated several roads of the city here with colourful lights and sculptures for the mega event.

The RMC in collaboration with the Sundargarh district police has installed CCTV cameras at all major junctions and vantage points of the city to boost policing, surveillance and security during the men’s hockey world cup.