Students punished by Odisha cop for calling him ‘Mamu’ 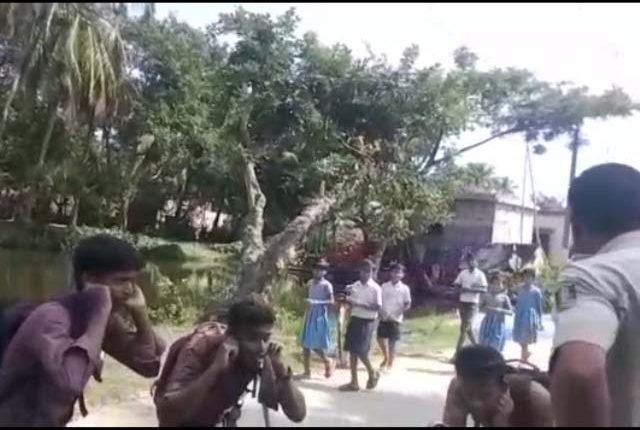 Balasore: In instance of police personnel misusing their power of khaki, five college students were asked to do sit ups as punishment for addressing a constable as ‘Mamu’ (maternal uncle) here.

The investigation is underway after a video showing the entire scene went viral in media.

The incident was reported in Baliapala area in the district where five students from Durga Prasanna junior college and Jamsuli College were punished by the Jamkunda police outpost constable Deepak Pradhan for silly reason.

According to reports, one of the students on their way back to homes on their bicycles told his friends to give side to Pradhan, who was travelling on a bike on Jagatipur-Panchupali road, calling him as ‘Mamu’. After hearing the word, the annoyed police constable stopped his bike near Mendhapada and asked them who addressed him as ‘Mamu’.

When the scared students did not reply, Pradhan allegedly thrashed them and asked them to do sit ups for 100 times as punishment for their mistake.

Although, the students did not disclose about the matter to anyone except their parents, the incident came to fore after a video featuring police constable’s ‘Dabangg’ (fearless) attitude went viral in media.

However, Pradhan termed the allegation ‘baseless’.