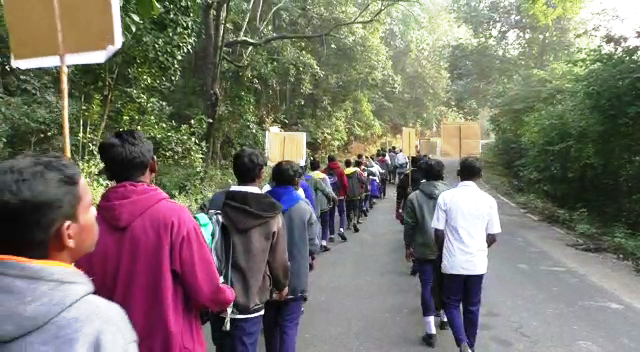 Phulbani: Protesting lack of teachers, a group of students of Belghar Residential High School under Tumudibandha block in Kandhamal district walked for kilometers to the block office and staged a dharna in front of it this morning.

Reportedly, around 54 students left the school hostel in wee hours today and walked for around 30 kilometres crossing forests and hills. Holding placards and shouting slogans, the students walked all the way to  the block office. After reaching the Tumudibandha block office, the students sat on a dharna demanding filling of vacant posts of teachers for Class 8 and Class 9.

They alleged that though they have raised the issue several times before, the authorities concerned have remained indifferent towards their demand. The  block officials were pacifying the students till last reports came in.

Akshay Kumar: Big directors don’t take me in their films

People with rare autoimmune diseases at death risk during…

Apple to replace iPhone 11 display with touch issues for…

COVID-19 Vaccine : WHO Hopes To Have 50 Million Doses Via…