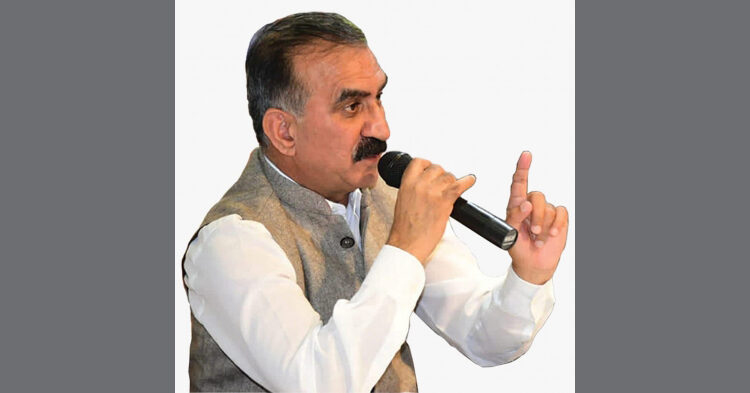 Shimla: Four-time legislator Sukhvinder Singh Sukhu, 58, also the head of the Congress’ election committee, will be the next Chief Minister of Himachal Pradesh, while Mukesh Agnihotri will be his deputy.

Their oath of office will be held in the state capital on Sunday at 11 a.m. with the induction of Council of Ministers later as per the discretion of the Chief Minister.

Sukhu, who is known for his proximity with the Gandhi family, was named leader of the Congress Legislature Party (CLP) after two days of hectic politicking by AICC in-charge for state Rajiv Shukla after his appointment was approved by Mallikarjun Kharge.

Sukhu, who has the support of a majority of Congress lawmakers, emerged from the three candidates in the fray for the chief ministerial post after getting majority in the 68-member Assembly by winning 40 seats.

Pratibha Singh, the wife of Virbhadra Singh, and four-time legislator Mukesh Agnihotri, were the frontrunners for the top job.

Earlier, the CLP attended by 40 Congress members on Friday evening, authorised Kharge to appoint the CLP leader. Shukla made the announcement of their appointment after the CLP meeting, the second one on the second day.

Sukhu began his career in student politics and rose to the position of party state unit chief from 2013 to 2019.

Hailing from Nadaun in Hamirpur district, Sukhu, who is is known in political circles for not sharing cordial relation with six-time chief minister late Virbhadra Singh, has served the National Student Union of India (NSUI), party’s student wing, during his college days.

He was elected president of its state unit in 1989.

From 1998-2008, Sukhu, who is known for his proximity with former Union minister Anand Sharma, also served as the president of the state Youth Congress.

Before joining the state politics, he twice served as councillor of the Municipal Corporation of Shimla from 1992 and 2002.

In the just concluded assembly Sukhu’s elections, he headed the election campaign committee.

The Congress on December 8 got an absolute majority in the Assembly elections, winning 40 seats — six over than the half-way mark of 34 in the 68-member House, while the outgoing BJP was reduced to 25.

Ropeway project at Nandankanan Zoo to be operational within month: Chief Secy

Cong to hold meet on Dec 23 to prepare for ‘haath…