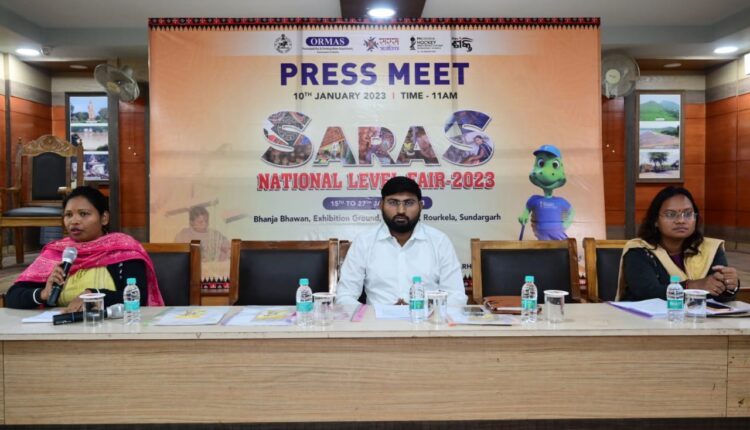 Rourkela: Adding flavor to the Hockey World Cup revelries, the Sundargarh District Administration will be hosting the all-India ‘Saras Mela’ at the Bhanja Bhawan Exhibition Ground in Rourkela from January 15 to 27.

The national-level food, art and cultural fair will provide a platform to Women Self Help Groups (WSHGs) and Producers Groups from Odisha and various other states to showcase and sell their products, said CDO & EO ZP Sundargarh Manoj Satyawan Mahajan while addressing a presser at the Rourkela Municipal Corporation (RMC) on Tuesday.

Giving details about the various events and programmes to be organized during the 13-days fair, Mahajan said, “We are hosting the national-level Mela for the first time in Sundargarh. A total of 250 stalls will be put up during the near-fortnight long event for which the District Administration has made elaborate arrangements. I appeal to all citizens and media representatives to extend cooperation in making the event a success.”

Mahajan urged the media representatives present at the presser to accord adequate importance and give maximum publicity to the ‘Saras Mela’ which the district has been privileged to host for the first time.

The Sundargarh District Administration is organizing the Mela jointly with the Panchayati Raj & Drinking Water Dept of Govt of Odisha and ORMAS. Terracotta products, Dhokra Casting metal crafts, handloom products along with various traditional food items prepared by various WSHGs from Sundargarh and other districts of the state will be merchandised at the fair.

Similarly, paper products from UP, various bamboo products from Assam and Tripura, woolens from Manipur, Himachal Pradesh, Uttarakhand and Jammu & Kashmir, Jute products from West Bengal, dried flower Potpourri from Manipur, rich handcrafted artifacts from Kerala and Andhra Pradesh are going to be the main attractions of the Saras Mela.

Another key attraction of the national-level fair will be the daily hosting of cultural programmes where well known artistes from the state and outside are slated to perform. This will give glimpses of the art, tradition and cultural history of Odisha and other states in the country.

The District Administration is leaving no stone unturned to make the event attractive as it is being held in the backdrop of the Hockey Men’s World Cup. Special arrangements are being made at the Mela venue to facilitate live telecast of the World Cup matches for the convenience of the visitors.

While a selfie point has been prepared at the ground, a series of special programmes are on cards for children. Moreover, various workshops have been scheduled for WSHG members.