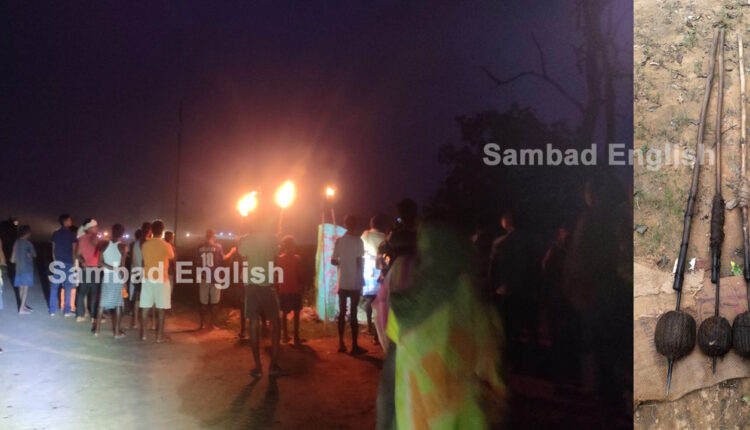 Kutra: Residents of the villages in forest areas under Kutra block and Badagaon range of Sundargarh spend sleepless nights every year to save their crops. Disgusted with the crop loss caused by elephants on a rampage, the locals have prepared spears with flambeau to tackle the jumbo menace this year.

“As the Forest officials are in limbo and are not proactive, we have been facing the crop loss problem year after year. Our efforts go in vain and we hardly harvest any crop,” many locals lamented.

Even as herds of elephants are being seen these days in Nuagaon, Panchara, Katangajharia, Kusumadegi, Sialajora, Jurajama, Automunda and Biratola villages under Kutra block in Sundargarh district, the local residents have prepared spears with flambeau to save their lives and properties, they maintained.

In search of food, usually, the jumbos stray into human settlements and very often damage the crops, rampage kutcha houses and trample the villagers. “The Forest department is not restoring water bodies in the nearby areas and growing sufficient trees for the elephants,” many local residents alleged. 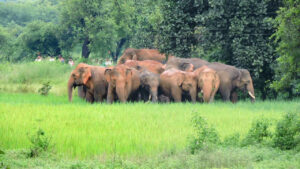 On the other hand, it has raised serious concern among a number of animal lovers in Sundargarh.

After the inflammable material attached to the flambeau of a spear is ignited, the villagers throw it at the pachyderms to drive them away. It often pierces into the body of jumbos and causes burn injuries. The wounds caused due to hot iron head of the spear give intense pain; hence, the wandering elephants immediately leave a human settlement and return to their wild habitat, an animal lover stated.

Even to the extent, the burn wounds develop severe infections leading to untimely jumbo deaths.

The issue was previously reported by the leading Odia daily ‘Sambad’ two years ago and had then made hue and cry in the State. Amid the perennial issue of human-elephant conflict, many animal lovers have demanded action against wrongdoer villagers. They insisted that the Forest department should make arrangements to regularly drive away elephants straying into human settlements in the district.

Forest department should come forward and be proactive in timely driving away the elephant herds. Otherwise, the dangerous way which is being resorted to by locals will pose a threat to the existence of the pachyderms. Legal action must be taken against the wrongdoers, a few intelligentsias opined.