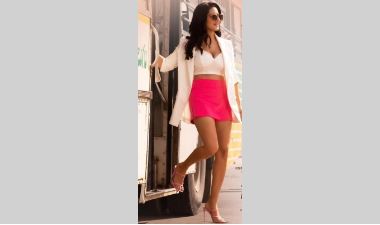 Donning a gorgeous pink and white playsuit, Sunny looks sensational as ever.

Talking about it, Sunny says, “I had the most amazing time shooting this movie. It was such an honour collaborating with Vishnu who is amongst the most amazing people I have ever worked with. For a star like him to be as grounded as him, is a real learning. He is wonderful and warm, giving his co-stars the space to bring their own. I had the most memorable experience in this movie and can’t wait for everyone to watch it.”

Directed by Surya, the film, which stars Vishnu alongside Payal Rajput and Sunny Leone, is a wholesome mass entertainer.

A frothy mix of masala with thrill, comedy, action and drama, the first look is making waves on social media.

For his part, Vishnu adds, “Sunny is exactly like her name. She will be a surprise factor in the film. She has such a wonderful vibe. She really gave the film its edge and x-factor. She is bound to surprise everyone with the film as Renuka. Watch out for her!”

The film has been written by Kona Venkat, who is known for penning the scripts of Vishnu’s earlier hits — ‘Dhee’ and ‘Denikaina Reddy’.